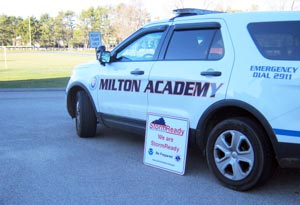 Milton Is StormReady, Thanks to the Campus Safety Team

Milton Academy is the first K–12 institution in New England (second in the country) to be recognized by the National Weather Service and U.S. Department of Commerce as StormReady, joining the ranks of local schools and communities including Harvard University, Tufts University and the City of Boston.

The designation officially recognizes communities that are prepared for significant weather events, with the communication and response tools aimed at keeping people and property safe in the case of a weather emergency. The StormReady program encourages communities to take a proactive approach to improving hazardous weather operations and awareness. 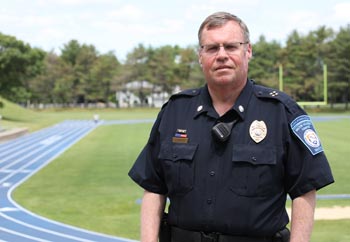 Jay Hackett, Milton’s director of campus safety and risk management, has achieved the “gold standard” in addressing safety and security issues at sporting events, according to a national organization recognizing Jay’s leadership. Jay is included among professionals from Major League Baseball, the National Football Association, and the Federal Bureau of Investigation receiving Professional of the Year Awards from the National Center for Spectator Sports Safety and Security (NCS4) at the University of Southern Mississippi.

Congratulations to Campus Safety Officers Dan Ford and Marty Prendergast on their completion of the National Association of School Resources Officers’ Basic Training Program. The five day (40 hour) course was sponsored by the Worcester Police and Worcester...