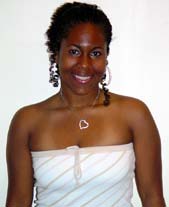 Cherelle was recognized for spearheading faith-based HIV peer education and prevention among teenagers in her home community of Fairfax County, Virginia. Head of the Milton Academy AIDS Board, Cherelle co-founded a Youth HIV Prevention Program in Virginia and serves as a regional coordinator. When she’s not studying, Cherelle spends her time training peer educators and conducting trainings in school, community and church settings, and speaking at national youth conferences and local youth events.

“It’s important to give back to your community,” explained Cherelle. “I’m lucky that I can combine stuff I care about— Youth HIV Prevention —with things I like to do such as public speaking.”

In addition to a $10,000 scholarship, Cherelle was honored at a gala recognition event in Louisville, Kentucky, attended by education, community, business and government leaders. Eric Saperston, a young filmmaker whose credits include, The Journey: Reflections from the Road, was the featured speaker.

The two-and-a-half-day program included a tour of Toyota Motor Manufacturing, Kentucky, Inc., in Georgetown. In addition, the Scholars cruised the Ohio River on the Belle of Louisville (a historic paddle wheeler).

Cherelle will attend New York University this fall, where she hopes to continue her participation in HIV prevention and training.