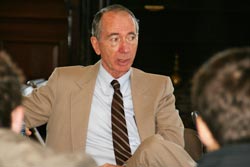 Dr. David H. Shinn, professor of international relations at George Washington University, an ambassador for 37 years in the U. S. Foreign Service, and an expert in African issues, is the 2008 Hong Kong Distinguished Lecture Series guest at Milton.  Dr. Shinn helped students explore and contrast the strategic foreign policies of China and the United States with Africa.  Dr. Shinn posed the question: “What does China, with a population of 1.3 billion people, have in common with the continent of Africa with 53 countries and a total population approaching 1 billion people?”  The short answer is globalization, Dr. Shinn explained, but the important aspects of the relationship between China and Africa are both complex and growing in importance and impact over time.

China prioritizes its relationship with Africa for a number of reasons: China’s interest in and need for natural resources and raw materials; the potential power of Africa’s support for China in the international arena; China’s assertion of the firm policy of “one China” — or the recognition of Beijing, not Taiwan; and China’s growing market for exports.

These interests which China pursues result in strategically designed policies and initiatives in Africa unmatched by those of Western countries.  They range from maintaining a strong and balanced trading partnership (importing African oil and minerals; exporting Chinese finished products); increasing financial investment in Africa; offering foreign aid in the form of loans highly advantageous to China; and developing relationships with pariah countries; to promoting awareness of Chinese culture and language throughout the African continent.

China’s practices and policies include negative and positive outcomes from either U. S. or African points of view.  Dr. Shinn contends, however, that while American and Chinese interests in Africa and different, they are not substantially so.  “There are more areas where the two countries can cooperate for the benefit of Africans,” he says, “than there are issues of disagreement and potential competition.”  After his lecture and questions from students, Dr. Shinn met in Straus Library with students interested in continuing the conversation.