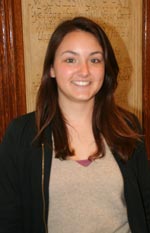 Chloe Michaelidis (Class II) joins the ranks of renowned writers and artists—such as Joyce Carol Oates, Robert Redford, Truman Capote, Sylvia Plath, Bernard Malamud and Andy Warhol—as a Gold Medal recipient of the National Scholastic Art and Writing Award. This award has honored the talent and creativity of young artists for nearly 90 years. From more than 165,000 submissions for this award, Chloe is one of this year’s honorees for her poem “Yia Yia.”

Chloe takes Advanced Creative Writing, a subject in which she has always been interested. “My dad got me into reading poetry when I was younger,” she says. Chloe’s award-winning poem, named for her grandmother, was inspired by a recent trip to Greece. Knowing that her grandmother had been ill for some time, Chloe expressed what she thought was her final goodbye during the summer of 2008. This summer (2009) she returned to Greece and visited her grandmother again; mere hours later Yia Yia passed away.

“Getting to see my grandmother one last time was a miraculous event, and I thought ‘I have to get this down on paper.’ I went through two or three drafts of the poem—the first few seemed too cliché—and Mr. [Jim] Connolly helped me figure out how get across what I really wanted to say.

“I love poetry—the challenge of trying to express an abstract idea or feeling in really concrete terms. The fun part is playing around with the words; because you use so few words, you have to make sure each is right. Sometimes I’ll hear a word that I like and I’ll jot it down to use in a poem later. To write poetry you just have to be willing to play around with the language.”

Visual and literary arts professionals review the submissions. Only 2,000 writing submissions are judged at the national level. As part of her award, Chloe is invited to attend a celebration in New York City this summer where winners will be honored during a ceremony at Carnegie Hall. There she will meet other artists and writers, and learn about creative careers from literary agents, studio artists, editors, gallery directors and writers from some of the world’s famous cultural institutions.