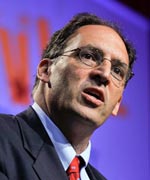 Alan Khazei‘s history could define the term, social entrepreneur—a creative person who applies the thinking and strategy normally associated with business ideas, to solve social problems or respond to significant social need.  Mr. Khazei, founder of two groundbreaking non-profits that have helped increase citizen engagement in problem-solving, convinced Milton students this morning that they were both capable of and responsible for change in “their century.”

In an interactive kickoff to an idea-filled day, Mr. Khazei explained his concept of the “big citizen” and shared examples of young people, from Martin Luther King to Wendy Kopp (Teach for America founder) who had acted definitively on a passionate belief. Creating a mechanism to draw others to action is not so hard, Mr. Khazei seemed to suggest. A belief in yourself and conviction about your idea is the beginning of what could have immense impact on the world.

Mr. Todd Bland, head of school, introduced Mr. Khazei to the gathered community. After graduating from Harvard Law School in 1988, Mr. Khazei and his law school roommate Michael Brown started City Year as a youth service corps engaging 50 young people in Boston.  As City Year expanded to other cities, Mr. Khazei was appointed to the Corporation for National and Community Service by President George H.W. Bush.  He served as a Vice-Chair from 1990-1992. President Bill Clinton cited City Year as the inspiration for AmeriCorps, which was the nation’s federal investment in national youth service. Today, City Year is a global organization operating in 19 cities in America and in Johannesburg, South Africa.

In June 2003, when AmeriCorps faced a drastic funding cut, Mr. Khazei joined with other service leaders to organize the “Save AmeriCorps” coalition, an effort that helped restore half the funding for the program that year and then achieve an increased appropriation of $100 million the next year.

Inspired by the success of the Save AmeriCorps campaign, in 2007, Mr. Khazei launched Be the Change, Inc., a non-profit that creates national public awareness campaigns promoting citizen service as a practical solution to problems facing our communities and our country. In 2009, ServiceNation, the first campaign to be launched from this platform, secured the greatest federal expansion of national service in the country since Franklin Roosevelt’s Civilian Conservation Corps.

Mr. Khazei has served on the Boards of City Year, Citizen Schools, the Harvard Alumni Association, the Mass Service Alliance, New Profit, Inc., Serve Next, Share Our Strength and Teach for America. He has received several honorary doctorates and numerous awards, including the Reebok Human Rights Award, the Jefferson Award for Public Service, and the Schwab Foundation Social Entrepreneur Award. In 2006, US News and World Report named him one of America’s “25 Best Leaders” and the Boston Globe Magazine identified him as one of 11 Bostonians Changing the World.” Mr. Khazei lives in Brookline, Massachusetts with his wife, Vanessa Kirsch, and their two children.