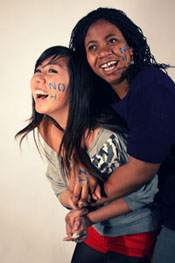 Advanced Photography student Claire Robertson (II) turned her lens on fellow students to promote a message of tolerance and inclusion. Claire, a board member of the student group GASP (Gay and Straight People), says the independent project was inspired by the NOH8 Campaign, a photographic silent protest created by celebrity photographer Adam Bouska in response to the passage of Proposition 8 in California.

Claire put out a call for student volunteers via email and word-of-mouth. She was amazed when 26 students showed up in the Art and Media Center for the photo shoot.

“The experience reminded me that Milton is a community, and people will come out to help and support you. People I did not expect showed up,” says Claire.

In the official campaign, various celebrities appear posed with duct tape covering their mouths and “NOH8” written on their cheeks. Claire and other GASP members decided to give the project a Milton spin.

“We thought duct tape was too harsh,” says Claire. “You can’t see the subjects’ faces, and that takes away the personality of the person. We also used the school colors on the stencils on their faces.”

“This project has been eating my life! I spent 30 hours just taking and editing photos, but it was so much fun.”

Faculty member Brian Cheney reviewed Claire’s work. She hopes to have a print display up in the hallways soon.