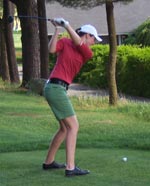 Claire Sheldon, Milton Academy Class of 2006 and currently a student at Harvard, won the 104th WGAM Massachusetts Amateur Golf Championship hosted at The Country Club in Brookline, Massachusetts.  Former captain of Milton’s golf team and winner of the Priscilla Bailey Award her senior year, Claire is preparing for another season on Harvard’s golf squad.  According to the Crimson’s Web site, Claire “was fourth on the team in stroke average after playing in seven tournaments as a freshman” and “registered three top 10 finishes.”