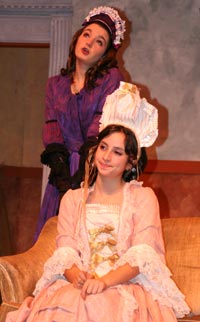 Curtains opened in King Theatre on Thursday, November 6, for the Class IV Play La Casa Nova, an eighteenth-century comedy written by Italian dramatist Carlo Goldoni. La Casa Nova, which translates to “The New House” or “The Superior Residence,” was Goldoni’s solution to legitimizing the comedic theatrical performances of Italy during his time. Prior to this, Italian comedies were largely improvised, in the form of Commedia dell’Arte skits, and rife with stock characters—the old man, the young lovers, the saucy servant. La Casa Novatakes the well-known scenarios of traditional Commedia dell’Arte, but broadens and develops them into a real play.

Peter Parisi, chair of the performing arts department, directs the Class IV Play, and he explains that it’s different than other Milton productions. “Because so many Class IV students are involved in the play in some way—whether they’re acting, working on the set, helping to direct, selling tickets, being ushers—they can all be proud of this as a class. It’s a bonding experience for them, and it’s something they’ll look back on.  For many students, it’s their first experience with a production, and they come into it with all levels of experience, which is something we embrace in our department. A lot of teaching has to happen at this level.  We also have to work a bit harder at risk-taking at this stage. But the students are into it; they’re not afraid.”

The play itself lends certain challenges to the young actors: “There is plenty of room in this play for moments of physical comedy, but these moments aren’t written in,” Peter says. “It’s up to the performers to build it in. One of the challenges—good challenges—with working on this play with the Class IV students has been helping them find the places to develop that physical comedy.”