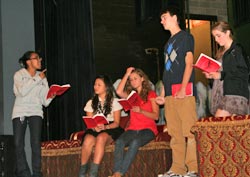 The Class IV Play is a long-standing Milton tradition, a momentous and memorable class event. This year’s production seems to have been inspired by the recent rash of vampires in books and on screen. Lady Dracula, written by Tim Kelly, introduces a next chapter in the tale of the famous bloodthirsty Count.

We meet the lovely but wicked Mina Alucard, one of Count Dracula’s many victims, living near a newly formed boarding school outside of New York City. The school’s property is haunted land situated next to an old graveyard. Miss Alucard, living across from the graveyard, keeps to herself until her terrifying thirst forces her to seek victims in the residents of the nearby school. A student’s research project uncovers a world that lurks beneath the cloak of night, leading to an unexpected ending for Lady Dracula—one that you won’t want to miss.

Director Pam McArdle says that Milton’s production of Lady Dracula is full of wonderful special effects with some exciting, hair-raising moments. “It is a bit ‘tongue-in-cheek,’ almost campy,” she says, “which makes it fun.”

Twenty-three Class IV students are involved in this year’s cast, and those who are not on stage are contributing behind the scenes, acting as ushers, or joining the audience in support of their classmates. Lady Dracula will haunt King Theatre on Thursday, November 19 and Friday, November 20 at 7:30 p.m., and on Saturday, November 21 at 7 p.m.