Classrooms with a Conscience: Ethics Conference at Milton 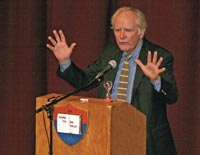 Milton Academy welcomed 180 teachers from independent and public schools at “Classrooms with a Conscience,” a day-long seminar focused on bringing ethical issues into classrooms. The conference was organized by Milton faculty members Gordon Chase and Heather Flewelling, and co-sponsored by Milton Academy and Facing History and Ourselves.

After a keynote address by author James Carroll, nine sessions offered a range of entry points for the consideration of contemporary ethics, from how to cultivate ethical thinking in digitally linked teenagers, to how to use sports or arts as springboards.

James Carroll has long been a respected, public voice making the case for focusing seriously on the moral dilemmas and ethical choices in contemporary life. “One of the most adept and versatile writers on the American scene today,” as the Denver Postcalled him, Mr. Carroll is the author of ten novels and six works of non-fiction, including the National Book Award winning An American Requiem; the New York Times bestselling Constantine’s Sword—now an acclaimed documentary—and House of War, which won the first PEN-Galbraith Award.

He received the 2009 Press for Peace Award from The American Friends of Peace Now, the Israeli peace group. He has been a Shorenstein Fellow at the Kennedy School of Government at Harvard University, a Fellow at the Center for the Study of Values in Public Life at the Harvard Divinity School, and the Richman Distinguished Visiting Professor at Brandeis.

This workshop focused on the ethical dimensions of young people’s participation in new media environments, such as blogs, multiplayer games, and social networks like Facebook. Carrie James, co-principal investigator of Project Zero’s GoodPlay Project, shared relevant research findings; provided an overview of a digital ethics casebook developed for use in schools and other learning environments; and engaged participants in a curricular activity aimed at cultivating ethical thinking among youth.

Carrie James is a research director and a principal investigator at Project Zero at the Harvard Graduate School of Education. Her research areas include young people’s engagement with the new digital media; conceptions of trust held by youth today; moral and ethical development; and conceptions of success, failure, and “good work” among youth and adults. Since arriving at Project Zero in 2003, Carrie has worked with Howard Gardner and colleagues on The GoodWork Project, an initiative focused on excellence, engagement, and ethics at work, in school, at play, and in civic and political life.

Carrie currently co-directs The GoodPlay Project, a MacArthur-funded study of the ethical character of young people’s activities in the new digital media, including online games, social networking sites, blogs, and other virtual communities. Her recent publications include Young People, Ethics, and the New Digital Media (The MIT Press). Carrie has an M.A. and Ph.D. in sociology from New York University.

Sport in Society – How Best to Maximize the Opportunities

This presentation centered on the role of adults in maximizing a young person’s sports opportunities and the importance of looking at adults’ role through the lens of leadership.  We touched on the importance of perspective with respect to why parents want their children to participate, as well as the perspective that coaches, administrators, and volunteers bring to our athletic engagement with children.

As the department head, Peter has been a national leader, championing the role sports can play in bringing about positive social change through research, education and advocacy. He has been outspoken in decrying the use of performance-enhancing drugs, competitive pressures placed on children, permissive attitudes toward professional athletes and a number of other sports-related issues. In October 2007,  Peter Roby was named one of the 100 most influential sports educators in America by the Institute of International Sport. His opinion pieces have been published on the editorial pages of the Boston Globe, the Indianapolis Star, the Dallas Morning Newsand the Oregonian.

The Ostracism Case Incident is a real experience developed into an educational case study by Facing History and Ourselves. Ostracism provokes meaningful reflection and discussion on ethical issues affecting schools. Participants reflected on the ostracism, bullying, and discrimination that affect individual student’s engagement and achievement as well as school climate. The Ostracism Case Study Workshop is a product of the Harvard-Facing History and Ourselves research funded by the Carnegie Corporation of New York.

Jennifer Jones-Clark is the associate program director for the New England office of Facing History and Ourselves. Jennifer has designed and facilitated historical based social justice workshops, seminars and other professional development programs for educators, corporations and community organizations throughout the United States and internationally. She holds a masters degree in interdisciplinary studies with focus on multicultural education and diversity studies and a masters in school administration.

Dan Sigward is the capstone coordinator and humanities teacher for the middle school program at Belmont Day School and facilitates workshops for Facing History and Ourselves. Dan has a master’s degree in elementary education and science journalism. He has participated in a variety of professional development courses including: The Institute for Writing and Thinking at Bard University, Revolutionary Grammar at Harvard University Graduate School of Education, and Project Zero classroom  summer institute.

Can We Teach Students to Think and Act on Issues of Social Justice?

The answer is, “yes!” Not just because we can, but because we must. students need to develop their ability to address real world social issues. The question is how to develop a curriculum that effectively accomplishes this end. This workshop examined the successes and challenges of the social justice curriculum development initiative (now in its sixth year) currently being implemented at Beaver Country Day School.

Robert Principe is in his sixth year as director of educational leadership in Beaver Country Day School’s Hiatt Center for Social Justice Education. His work supports school-wide diversity and inclusion initiatives. Robert also works directly with the faculty supporting the development of social justice teaching in the curriculum. He came to Beaver having done years of multicultural education work in higher education and diversity training in the business sector. Robert was also a founding member of the Worcester ALANA Students Support Network and taught English as a second language for four years at Quinsigamond Community College.

These days many of us as parents and teachers are focused on our children’ s happiness and achievements. But this intense focus on happiness and achievement—and the constant praising of children that goes with it—can imperil the development of moral qualities. What kinds of achievement pressure are constructive and what kinds are destructive? How can we raise children who are happy, high-achieving and moral? What are the key moral qualities we need to develop in childrens, and how can we as teachers and parents develop them? This talk described concrete practices at the heart of being an effective moral mentor. It also took up how children’s moral growth is tied to our own moral growth as teachers and parents.

Richard Weissbourd is a lecturer in education at the Harvard Graduate School of Education and the Kennedy School of Government. His work focuses on vulnerability and resilience in childhood, the achievement gap, moral development, and effective schools and services for children. For several years he worked as a psychologist in community mental health centers as well as on the Annie Casey Foundation’s New Futures Project, an effort to prevent children from dropping out of school. He is a founder of several interventions for at-risk children, including ReadBoston and WriteBoston, city-wide literacy initiatives led by Mayor Menino. With Robert Selman, he founded Project ASPIRE, a social and ethical development intervention. He is a founder of a new pilot school in Boston, the Lee Academy that begins with children at 3 years old. He has advised on the city, state and federal levels on family policy and school reform and has written for numerous scholarly and popular publications, including The New York Times, The New Republic, and The American Prospect. He has also written for NPR and blogs for Psychology Today. He is the author of The Vulnerable Child: What Really Hurts America’s Children and What We Can Do About It (Addison-Wesley, 1996), recently named by the American School Board Journal as one of the top ten education books of all time. His book on moral development, The Parents We Mean to Be: How Well-Intentioned Adults Undermine Children’s Moral and Emotional Development (Houghton Mifflin), was published in March, 2009. It was recognized by The New Yorker magazine as one of the top 24 nonfiction books of 2009.

Engaging students in meaningful study is bedrock for effective teaching. Participants explored Choices in Little Rock (CILR), an eighth grade civics curriculum that uses learner-centered methods to teach the history of school desegregation culminating in a case study of the integration of Central High School in 1957. Evaluation research of urban and suburban students shows that CILR has increased students’ capacity to stand up for what they believe in, and to think critically about racism.

Anna L. Romer, Ed.D., is a teacher, psychologist, researcher, writer and editor with broad knowledge of professional development and education at the high school through college and professional continuing education levels. Dr. Romer serves as associate director of evaluation research at  Facing History and Ourselves.

Science and Society: Exploring Current Science and Ethics in the Classroom

Elizabeth Lillis has been teaching biology for more than 11 years, including at Brookline High School, Newton Country Day School, and currently at Milton Academy. She has taught courses ranging from ninth grade laboratory science through high school elective courses in the biological sciences.  She earned her B.S. in biology from Georgetown University and her M.A. in education from the University of Maryland. Elizabeth coaches girls’ varsity soccer, has taught seniors in the Affective Education program, and is part of the dean of students’ team for the junior class.

“The arts involve emotion, mystery and the spirit, but what has been under appreciated is that art involves using the mind.” Dr. Howard Gardner, Harvard University. This workshop highlighted the Nesto Gallery exhibition titled “Illuminations – The Art of Samuel Bak.” Participants explored how to use art to understand issues of identity, membership, and memory. How can we use art to create social justice education?

Jennifer Jones-Clark has a degree in fine arts and serves as the associate Program Director for the New England Office of Facing History and Ourselves. Jennifer has designed and facilitated historically based social justice workshops, seminars, and professional development programs for educators, corporations, and community organizations in the United States and internationally. She holds a master’s degree in interdisciplinary studies with a focus on multicultural education and diversity studies, and a master’s degree in school administration.

The Power of Stories

How can the classroom be a teaching center for ethics and social justice? Is there an advantage for English, modern languages, or science? Can students realize a connection between well-known great stories, big theories, personal narratives and life situations? Where does a lab or creative writing fit in? Is there a role for oral history as we assist students to uncover the connection between academics and their lives?

Justice Williams is an activist and published poet originally from Atlantic City, New Jersey. He has facilitated workshops for 15 years for public and private schools, for non-profit, and for-profit organizations on diversity issues, how to engage “at risk youth,” and at integrating social justice into the classroom. He directs the Social Justice Initiative that engages educators, administrators, and youth workers on how to fold social justice into work with young people, has directed community education programs, and led dozens of youth programs in Massachusetts. His strengths include grassroots fundraising, curriculum development, and bringing people together that normally would not work together.