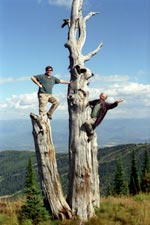 The new photography exhibit at Milton’s Nesto Gallery offers two views of the natural world: One view is up close, almost microscopic. The other offers a vast expanse. Camera Comrades Sharing the Adventure of Lens and Light features the work of long-time visual arts faculty member Bryan Cheney and his former student Clay Hutchison ’76.

Bryan’s camera lens dives deep inside flowers from his garden in Maine. All of his work was done outside in natural light, the flowers in their natural state. The resulting photographs reveal the intricacies and brilliant colors of day lilies, peonies and poppies. The photos, taken over a four-year period, convey texture, shape and light.

“The variations of that light in its interplay with our world yield a variety of color, form and pattern that is endless—and to me, a never-ending source of fascination, wonder and joy,” says Bryan.

Clay’s photos feature large swaths of snow, mountains and sky from his travel adventures and mountaineering trips throughout Europe, India and Nepal. His collection also depicts the countries’ local people in their day-to-day life.

“The challenge is to put the elements of the natural world, the landscapes I’m traveling through, and the people I encountered together using the full frame canvas of my camera format,” says Clay.

Clay’s photos date from the late ’70s to 2000, when he was still shooting in film. Today, like most photographers, he shoots in digital. Clay says his artistic collaboration with Bryan began soon after Milton during his gap year and Bryan’s sabbatical. Over the years, as photographers, they’ve traveled, attended workshops, and worked on books.

Clay lives in Idaho and is the parent to two Upper School students.

“It’s nice to come back and see all the changes to the School,” says Clay, “and to work again in the photo lab—which is a much different space than when I was here.

The Nesto Gallery is located in the lower level of the Old Science Building. The exhibit is open weekdays from 8:30 a.m. to 3 p.m.