Competing in “Congress” for Milton 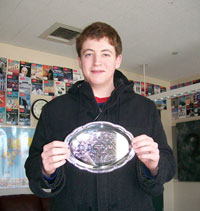 Congressional Debate, known as “Congress” at Milton, is a particular style of competition: Students write and submit “legislation” and then, acting as U.S. Congress people, present their bills in three-minute speeches. Two hardy Milton students — of the more than 60 members of the Milton Speech Team — choose to compete in “Congress.” Class II student Martin Page is one of those two; he has been a team member since his Class IV year. “I’ve always been interested in current events, and I joined the team because I thought it would really fit my interests. You either love or hate the Congress style. It’s definitely one of the ‘nerdier’ events.”

Martin says although he enjoys preparing and presenting the speech, his favorite part of competition is what follows: the arguments. This past weekend, Martin competed in the 37th annual National High School Invitational Forensics Tournament at Harvard University. Competitions are rigorous and could be exhausting for anyone but the truly committed. After a total of 17 hours of debating over three days, Martin finished 15th out of 385 students.