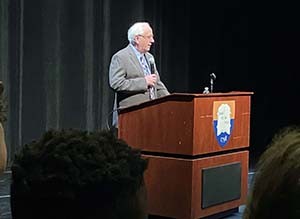 “The best way that we can do what is best for our citizens is to have open and frank discussions about what we need to do,” said Mr. Lyons, who spoke at the Conservative Club assembly. “We can disagree and respect one another. We don’t have to be angry about the things we believe in, but we should stand up for what we believe in.”

Mr. Lyons, who is a small business owner, served four terms in the Massachusetts House of Representatives, a body where Democrats outnumber Republicans 127–32. One-party rule is unproductive, he said. He described loving to debate his Democrat colleagues and friends on issues such as healthcare and local aid to cities and towns, but said he has maintained friendships across the aisle despite those disagreements.

Ultimately, leaders need to find a way to provide for citizens in need and encourage economic growth by working together and being respectful of one another’s opinions, even in disagreement, Mr. Lyons said. “Bringing people together is the most important thing.” Government is not the answer to all the problems facing society today, he said, but it does play a role in helping poor, elderly, and disabled people.

“My liberal friends have the same vision for what we want to accomplish,” he said. “They just have a different approach.”

As a small-business owner, Mr. Lyons said the freedom to “wake up in the morning and do what I want to do is what America is to me.”

Mr. Lyons grew up in an Irish-Catholic Democrat household in Arlington, Massachusetts, and his police officer father told him he could do anything he wanted—just never vote for a Republican. When Mr. Lyons changed his voter registration to the Republican party, he never told his father.

Today, as a father to two adult sons, his hopes are that regardless of their political opinions, they remain strong in their convictions.

“My sons don’t agree with everything I believe, and we’ve had a few vigorous debates,” Mr. Lyons said. “My wife and I have always told them, ‘You have a right to believe whatever you want to believe.’ And we’ve tried to instill in them that it’s important to not be afraid to share their opinions.”

Mr. Lyons became chairman of the Massachusetts Republican Party in 2019. Previously, he represented the 18th Essex district in the Massachusetts House of Representatives for four terms. He owns a chain of stores that sell flowers, ice cream, and Christmas trees in the Merrimack Valley. He attended Brandeis University.