A Conversation with the Surgeon General, Dr. Vivek H. Murthy 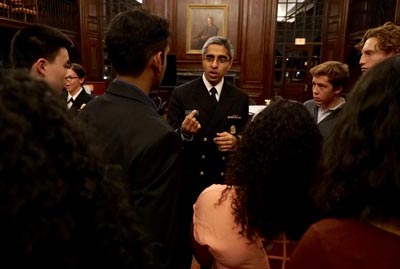 On November 29, the United States Surgeon General, Dr. Vivek Murthy, spoke with students and faculty as Milton’s 49th Alumni War Memorial Lecturer. Both in Straus Library, and later in the Fitzgibbons Convocation Center, Vice Admiral Murthy answered students’ questions about his role and about some of the most pressing public health issues facing America.

“I came here today because I believe you, young people, are the best shot we have in this country of overcoming the challenges that we face,” said Dr. Murthy. “It’s easy to think it’s someone else’s job to solve the country’s problems. You have to be that someone. … A leader is someone who has a voice and chooses to use it.”

Dr. Murthy explained that as Surgeon General his primary roles are to oversee the United States Public Health Service—one of the seven uniformed services of the United States—and to communicate the best possible information on health-related issues, so that medical professionals and all Americans can make informed decisions about health care.

“At a time when we are inundated with all kinds of news—some of it fake, some of it real—ensuring that people have access to the truth and to scientific information could not be more important,” said Dr. Murthy.

The Surgeon General shared experiences that shaped his career trajectory—some from his childhood memories of his parents’ medical clinic in Miami, where he learned that medicine was not simply about “making diagnoses and writing prescriptions, but about building a relationship of trust and respect between a doctor and a patient.”

An unexpected opportunity his freshman year in college brought a career in health care to the forefront: he and his friends learned of a philanthropist who was looking for a cause. With the philanthropist’s backing, the students developed an HIV peer-education initiative in India; with unlikely success, American students approached convent schools in India and convinced senior nuns to let them talk to their students about sex and HIV. The group was invited to teach at 90% of the schools they approached.

“One of the great things about trying something when you’re young is that you don’t know all the reasons to doubt yourself, or how you might fail,” said Dr. Murthy. “You just try.”

Marshall Sloane (I) and Elina Thadhani (I) joined Dr. Murthy and Head of School Todd Bland on the dais to ask questions of their own. They then invited classmates in the audience to ask questions, which covered a range of topics including mental health; substance abuse; sex education; gun violence; and the opioid epidemic.

Dr. Murthy’s answers included personal perspectives, including that on marijuana legalization: “Science should guide our policy when it comes to marijuana; we don’t yet have enough high quality evidence of marijuana being a safe and effective treatment of medical conditions—the certain standard of evidence that we hold every other medication to… that which helps guide doctors in dosing and other safety measures.” He also cited staggering statistics as food for thought: Almost 21 million Americans suffer from a substance abuse disorder, and only one in 10 get treatment; every $1 invested in substance abuse treatment and prevention saves $4 in health care costs and $7 in criminal justice system costs. Dr. Murthy outlined some successful government programs and policies that address these and other issues, but he made clear that policy was not the most efficient or effective means of creating change—that real and lasting change begins in our communities “from the ground up.”

Dr. Murthy answered questions about the opioid epidemic and heroin addiction, stating the importance of focusing substance abuse prevention programs on youth: “If we can protect young people’s brains throughout adolescence, we have a better shot at keeping them free from substance abuse later in life. And you each have a powerful role in affecting the choices your friends make. I know it’s not always cool to be the voice of reason, but that’s one of the most powerful roles you can play.”

Dr. Murthy spoke of the need for sensible gun laws, education around gun safety, and greater investment in mental health services. “We’ve allowed ourselves to become polarized in our debates on issues that are really important—to get locked into two corners in a battle where nobody wants to move. When we step back, we realize we have many things we agree on in terms of steps that can and should be taken.

“What we need in America is to rebuild our foundation,” he said. “The foundation of our country has become shaky. It’s not built on money, or on the strength of our military; it’s built on the connections between people. When the connections between people are weak, we can’t come together to overcome big challenges, to support important but hard decisions, we can’t even come together to have conversations without dismissing someone’s point of view.”

He posed what he called “the defining question facing our country” to students in the audience, and he reminded them that their generation would be the one to solve the problem: “How do we rebuild the foundation of our country, one that’s informed and guided by the relationships we have with one another—informed by compassion, and a willingness to listen and understand?”

The Alumni War Memorial Foundation was established in 1922 to honor Milton Academy graduates who sacrificed their lives in World War I, and it now honors all those who died in the wars and conflicts that followed. The Foundation supports lectures and informal conferences dealing with the responsibilities and opportunities associated with leadership in a democracy.