Let’s talk this morning about discipline, about determination, about courage, about courtesy (04 that’s four for you!)

Some twenty-three years ago, I was sitting in a café talking with a man I would later marry. His eyes were on fire. His normally steady and soft voice was ragged and full of passion. None of it had anything to do with me, sigh. No, he was talking about Charly Gaul, a man of bad humor and bad attitude, known as the Angel of the Mountains. Serge leaned forward as if to mimic the movement of this most heavenly of climbers who turned rain and snow into beautiful weather. Charly Gaul won the Tour de France in 1958 and all of Luxembourg, including my husband, celebrated with a vigor that rivaled the festivities when the Patriots won the Super Bowl. Over a bicycle race? Come on. 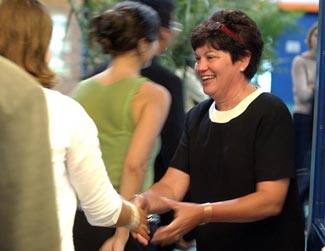 Now, I could remember learning to ride a bike. How many of you can remember getting off those training wheels and awkwardly keeping your balance for a few rotations until you got the feel of the bike and felt the wind in your hair? I could even remember taking bike hikes, my lunch in side baskets, and a group of friends close at hand as we rode off to the lake for the day, but racing? Yeah, I had those 1” wide racing tires on my bike (at least I did until my sister borrowed it and the bike got stolen). But racing? Never thought about it before that conversation and I did not think about again until three years ago. One evening after dinner, I happened upon a conversation between two of our trustees. I sat down to join them. And, just as quickly realized they were in the middle of an intense exchange punctuated by expressions of disbelief and amazement. Admiration suffused their voices. They were talking about a book – It’s Not About the Bike – My Journey Back to Life. Cancer is not usually the subject of after dinner conversation. Neither is cycling. But both were deep into it. They were talking about Lance Armstrong who had won the Championship of Zurich in 1993. In 1995 he won the 12 day, 1,225 mile Tour Dupont through the Caroline Mountains and in 1996 he became the first American to win the grueling Fleche Walloonne through the Ardennes. He was a good cyclist on a good team. People had their eye on him. But in October of 1996, his career and his 25 year life appeared to be over. He was diagnosed with testicular cancer. The cancer had spread to his abdomen, lungs and brain – 14 tumors in all. He had a 40% chance of survival and, many thought the doctors were just being kind. But he did it, despite the odds. He survived. And more amazingly, after brain surgery, extensive chemotherapy and the loss of a testicle, two and a half years later won the prologue of the 20 day Tour de France on the fourth of July. For a day, the yellow jersey belonged to a man abandoned by his Cofidis team during his illness. It belonged to a man who had the discipline to get back on his bike and deal with the fact that ten minutes on the flat was exhausting. Who had the determination to keep riding and training until ten minutes on the flat became hours in the mountains. The prologue was a sign of things to come. He won his first Tour de France as a member of the US Postal Service Team. 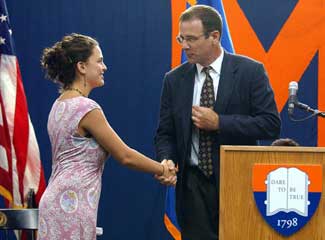 Stage racing is complex. You can win the overall race, without winning any of its parts, because it is the overall time that matters not the number of stages you take. So, if a racer finished second or third more times than anyone else finishes first, he can win. But, inevitably the winner wears the yellow jersey at least once. Sounds a bit like your academic work. Your overall performance is more important that the occasional tour de force performance.

Lance Armstrong did not beat cancer and he did not win the Tour alone. In his fight against cancer he had a team of specialists, doctors and nurses who helped him triumph. Just so with cycling. Cycling is a team sport. There are eight other members of the US Postal Team and those teammates are essential to Lance’s success just as are the teammates of any other champion. They run interference, they protect the leader, they block the wind, they attack opponents and tire them out so that the leader can save his strength, they provide the water, and they carry the snacks. Each member of the team races the entire race just like the champion without the publicity, without the fame. They suffer the pain to insure another’s success. Armstrong divides his winnings among his teammates, not because he has to, but it is the right thing to do. He could not do it without them just as no one of us can succeed without the help and support of our various teams. But more about that in a minute. 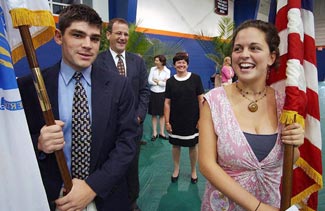 This year was the 100th anniversary of the Tour de France, a race that covers the entire circumference of France, mountains included (two ranges) in 20 stages over three weeks in the heat of summer. This summer was Armstrong’s attempt at a fifth straight victory. Only four others in a hundred years had done five in a row – Jacques Anquetil and Bernard Hinault of France, Eddy Merckx of Belgium and Miguel Indurain of Spain. Could he do it?

In stage 1, a pile up left an 18 inch tire track across his back. Tyler Hamilton, leader of the CSG team and hailing from Marblehead broke his collar bone. In a decided display of courage and fortitude, Hamilton continued and finished fourth overall 19 stages later. Back to Armstrong. A couple of stages later he grabbed the wrong shoes. Some six hours later he could hardly walk because of the tendon in his hip. Then after a beyond category climb with 21 switchbacks a few days later, Joseba Belocki, one of his key competitors, went down when his tire slipped on some asphalt on a brutally hot day as they headed down a winding descent. Armstrong avoided the crash by riding into a field. He churned through weeds until he came to a ditch, clicked out of pedals, lifted his bike over his head, leaped over the ditch and continued on. For Armstrong it seemed to be a little short cut – yeah, one treacherous enough to have done anyone else in. Belocki had fractured his wrist, elbow and femur and was out of the Tour. 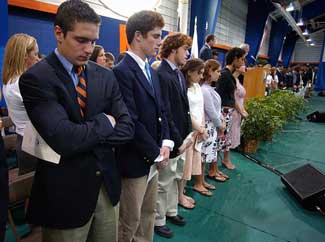 In the Stage 12 time trial, Armstrong underestimated his water needs. Dehydrated by the 104 degree temperature over 47 kilometers, Armstrong became dehydrated, losing 14 pounds in the last 30 minutes and ending the trial beet red with eyes bulging and a pasty white ring around his mouth. They put him on saline IV to re-hydrate him. Fluid he could regain, but he gave up 1 minute, 36 seconds to rival Jan Ullrich of Germany.

It got worse. By stage 14, his lead over Ullrich was only 15 seconds and the race was in the Pyrenees. With less than 10 kilometers to go, Armstrong started sprinting up the mountain, “attacking” in the parlance of racing, Ullrich and a small group of riders, including Tyler Hamilton. Armstrong’s handlebars caught the strap of a spectator’s tote bag. Suddenly Lance was flying toward the asphalt rather than up the mountain. He picked himself up and rethreaded his bike chain in about 15 seconds. For him he had to get moving or this was it. His age meant that even in a sport that favors the mature athlete he could not achieve another four straight victories to have a shot at five straight later on. A bit up the road his foot slipped as the gears lurched. Turns out in the fall he had broken his rear chain stay. It was nye on miraculous that his steady cadence alone seems to have prevented the bike from breaking into two pieces. Catching a tote bag, falling, rethreading his chain, and pumping his way up the mountain on a broken bike. Who else could have increased his lead over Ullrich in 67 seconds through all that to win the stage? And there is a sidebar to the story that has to do with courtesy. It is part of the tradition in cycling that racers do not take advantage of a leader’s misfortune. When Armstrong went down, Ullrich slowed everyone down so that the positions each had held when Armstrong fell would be the same when Armstrong got back in the race. That is sportsmanship, it probably cost Ullrich the Tour, but Armstrong had done it for him in an earlier race. Something to remember when each of you has the choice to make between behaving gallantly or mixing it up with the opposition in ways that do not reflect well on you or your team. It could cost you the game, but it is the right thing to do, no matter how badly you want to win. 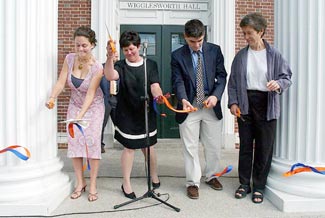 Armstrong and the US Postal Team won the 100th Tour de France despite seemingly impossible odds and happenings one could not invent if one tried. In his words “My guys busted their hump for me – kept me in it.”

Discipline, determination, courage and courtesy. Armstrong has them all. Each of you does too. But they are not things that come easily. You have to reach for them, work at them and practice them day in and day out in all sorts of situations, simple as well as complex.

This summer, passionate as I have become about the Tour de France (my husband was right – Charly Gaul was one heck of a champion) and Lance Armstrong if the truth be told, the only way I could follow it was on the internet. Each day at 4:00, I connected to various sites and read the results, looked at the still pictures, followed the minute by minute reports. The only exception was Stage 19, the final time trial. With Armstrong only 67 seconds ahead, I was determined to see it live. A simple thing like that required the discipline to find a TV that carried Outdoor Life, the courage to ask a bartender to turn off the ballgame and turn on the Tour and the courtesy to thank him for his indulging me over everyone else in the place. Somewhere around September 15 my 4 hour DVD of the 2003 Tour de France will arrive. Let’s find a big screen TV and watch it together.

Stay tuned, it will be one magnificent tribute to determination, discipline, courage and courtesy.