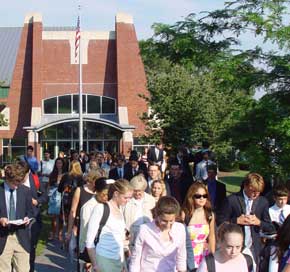 On Monday, September 13, Convocation launched the 2004–2005 academic year. Head monitors Gladys Girabantu, of New York City, and Anthony “Buddy” Calitri, of Whitman, Massachusetts, welcomed students, urging them to strengthen the Milton community through open communication with faculty, administrators and classmates. “[Our School environment] is up to all of us,” Buddy said. “Everyone must ‘Dare to be true.’” Head of School Robin Robertson reminded students that getting involved challenging conversations and embracing diversity are central to the School’s mission and the world’s future. “When differences are seen as undesirable…we are in danger,” she said. She pointed to alumnus Elliot Richardson, Class of 1937 and the only American to head four different Cabinet departments, as a model for doing the right thing—even when expressing differences meant opposing then-President of the United States Richard Nixon by refusing to fire Archibald Cox, the independent prosecutor investigating Watergate.