Corn In Our Hair? Filmmaker and Environmentalist Ian Cheney ’98 Explains 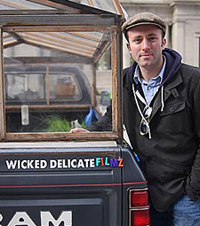 In honor of Earth Day, the student environmental group Lorax hosted a visit to campus by documentary filmmaker Ian Cheney ’98. Ian has directed several award-winning films about humans’ relationship with the environment, on topics ranging from farming and our food system, to light pollution and water pollution.

“Food is the most direct daily contact that most of us have with the environment,” says Ian. “What we choose to put in our body affects our health, but it has ripple effects on the climate and other species. With a more considered, thoughtful relationship with food you can, in a sense, eat your way to being an environmentalist.”

As an undergrad at Yale, Ian and his friend Curt Ellis realized that scavenging leftover donuts at the end of the day from Dunkin’ Donuts wasn’t the most healthful decision. And the old saying, “You are what you eat,” began to make them nervous. The two learned that a person’s hair is a telling barometer of diet; testing their own, they learned that the carbon in their body primarily originated from corn, a staple ubiquitous in today’s American diet.

Building awareness and action on campus at Yale about the origins of our food led Ian and Curt to pursue the experience on a larger scale. After graduation, the two set out for a cornfield in Iowa to plant, grow, harvest and follow their acre of genetically modified corn through America’s food system.

Their documentary based on that effort, King Corn, earned critical acclaim and aired on PBS in 2007. Since then, Ian has directed several films including The Greening of Southie, Truck Farm and The City Dark. His most recent film, The Search for General Tso, premiered at the Tribeca Film Festival earlier this month. Ian’s work has earned him an Emmy nomination and a Peabody Award. He is also the youngest recipient of the prestigious Heinz Award, for using “humor and innovative programming to engage people about sustainability.”

Ian and Curt are also co-founders of FoodCorps, a nationwide service organization that connects children with real food and a healthy lifestyle. In its third year, FoodCorps has 125 service members in 15 states.