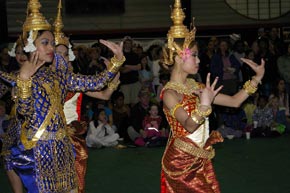 Milton Academy’s CultureFest energized a late-winter weekend with dancing, a wide variety of great food, performances and music in the Fitzgibbons Convocation Center. Students and faculty explored booths from around the world and from regions of the United States. The Lowell-based Angkor Cambodian Dance Troupe, special guests, anchored the performances. Other groups and individuals joined in. Partygoers—the whole community of students, many families, faculty and staff—enjoyed a world’s-worth of sights and sounds and tasted a world’s-worth of treats.

CultureFest, directed by Heather Flewelling, director of student multicultural programs, is held biannually; it gives the Milton community a chance to learn more about our histories and cultures. It reminds us, in a most colorful way, that we all bring culture to share. Culture is not limited to ethnic background; cultural identity is linked to geography, and to experiences that are shared, over time, with a group.

“Milton embraces diversity—from the art on the walls and the books in the library to the curricular offerings and the families in our community,” says Christine Savini, director of diversity planning who, with the student group Common Ground, founded the biannual celebration in the early-‘90s. CultureFest is an opportunity to gather our many backgrounds. It is our indoor potluck and concert. Best of all, it is a breath of sunshine lightening our March routine.