A Day in the Life of the U.S. Senate 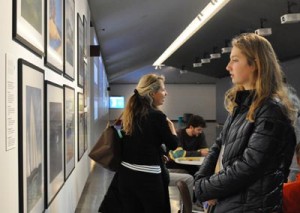 It’s one thing to learn how a bill becomes a law. It’s another thing entirely to step into the shoes of a lawmaker.

American Government and Politics students spent Tuesday morning at the Edward M. Kennedy Institute for the United States Senate in Boston, where they shed their student personas and became U.S. senators, poised to act on a comprehensive immigration reform bill.

“It’s helpful for them to have hands-on experience with the process,” said Perin Gokce, the history and social sciences faculty member who arranged the trip. “It gives them a better understanding of all of the competing demands that senators grapple with before they go into a vote: their party’s interests, their state’s interests, and their personal viewpoints.”

Milton students joined students from Mansfield High School in the Kennedy Institute’s senate chamber, a nearly-exact replica of the U.S. Senate’s chamber in Washington, D.C. Randomly assigned political parties and represented states, the student senators broke into subcommittees, where they had the opportunity to ask Kennedy Institute staff experts about different provisions they could attach to the bill, or where they interviewed and voted on presidential appointees. They then caucused with other members of their parties to decide on proposed amendments to the bill. Finally, student representatives from each party spoke on the senate floor to defend their amendments. The bill was defeated by a vote of 51–39.

Each student was given a profile that included their party affiliation and the top political priorities for the state they represented. They then weighed different options based on factors such as job creation, government spending, civil liberties, and national security.

Perin is interested in creating more hands-on opportunities for her students, including mock Supreme Court hearings and debates. It’s a worthwhile challenge for students to try on a position that they may be personally opposed to. “It’s a good exercise to have them argue for the other side sometimes,” Perin explained.

The late Massachusetts Sen. Edward M. “Ted” Kennedy, Milton Class of 1950, envisioned the Institute as a place where visitors can learn about the legislative process. During their visit, the Milton students got a tour of Sen. Kennedy’s office, most of which was transferred to Boston after his death and arranged as it was in Washington, D.C.

They also viewed an exhibit dedicated to the late New York Rep. Shirley Chisholm, the first black woman elected to Congress and the first black candidate to run for a major-party presidential nomination. Rep. Chisholm’s famous quote, “If they don’t give you a seat at the table, bring a folding chair,” is represented throughout the Kennedy Institute with folding chairs that have been decorated to honor people who have been historically underrepresented in American government.