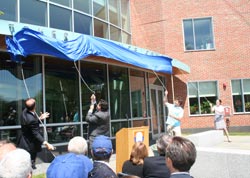 A stiff spring breeze lifted the blue bunting hung over the building sign as Milton Academy dedicated the Pritzker Science Center. Gathered in the sun, students, faculty alumni and parents listened as Head of School Todd Bland and President of the Board Brad Bloom thanked the individuals who helped bring the state-of-the-art facility to fruition. In his introduction, Mr. Bloom noted that it would now be hard to imagine Milton without this new science center.

J.B. Pritzker ’82, attending the ceremony with his wife and two young children, let on that he wasn’t the best science student during his Milton years. Former classmates, he thought, might be surprised to see his name on a science building.

“But at the time, this building is what was most needed at Milton Academy. To me, Milton is a school where you can find your place in the world. I am so grateful for my Milton experience. I tried all kinds of classes and activities during my time here and this building extends the opportunity for students to engage in scientific inquiry and to explore.”

Michael Edgar, chair of the Science Department, compared the building to the concept of emergent properties in biology; that is, the whole is more than the sum of its parts. He emphasized dynamic work by students and teachers taking place every day in the new labs.

“This building is the living testimony of the power of a gift to Milton,” said Mr. Edgar.

“I owe my appreciation and love of science to the teachers here,” said Tom. “From dropping pumpkins off the roof in Mr. Gagnon’s physics class to analyzing mitochondrial DNA in Miss Lillis’ biology class. I hope that I never take for granted having classes in such an amazing building. “

Isabelle said that Milton was where she learned to succeed in science.“Dr. Eyster cultivated in me a deep passion for biology and the scientific process.  She taught me how to ask hard questions, then work for answers.”

“This is not a place that lectures, dissuades, weeds out or discourages,” said Isabelle. “We learn that science is multi-faceted and ever-changing, with what is ‘right’ being disproved all the time.”

Head of School Todd Bland concluded by reminding the crowd that “everything around us, both those things we see and those that are part of our experience here, has been given to us by decades of donors stretching back more than 210 years to our founding.” He saluted the leadership of Milton’s board presidents Marshall Schwarz ’54, Fritz Hobbs ’65 and Brad Bloom; and former heads of school Robin Robertson and Rick Hardy.Mr. Bland thanked the many donors who made teaching and learning in this building possible, particularly Mr. Pritzker, “who is a great representation of what Milton is.”

At the end of the ceremony, Mr. Pritzker, Mr. Bland, Tom and Isabelle pulled away the blue banner to reveal the letters “Pritzker Science Center” above the entrance.

The Pritzker Science Center was designed by William Rawn and Associates and meets silver LEED certification by the U.S. Green Building Council.