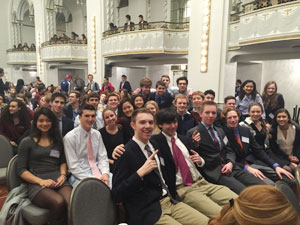 Twenty-nine Milton students competed in the Boston Invitational Model United Nations Conference (BosMUN) at Boston University last weekend. The conference is a three-day simulation of the United Nations and draws high school delegates from around the world. Mark Heath—history faculty and club sponsor—is proud of all the students’ impressive work; 13 students received awards for the high quality of their research and debates.

Each student represented a specific country or political figure, and the debates centered on topics as contemporary and relevant as climate change, anti-terrorism tactics, Iran’s nuclear deal, and Syrian refugees; as well as historic simulations of such events as the Russo-Japanese War and Simon Bolivar’s Liberation of South America.

Rika Ichinose (I), one of the clubs co-heads, earned a first place award for Best Delegate. She represented Malaysia in the Special Political and Decolonization Committee, where the topic focused on human trafficking.

“I am so proud of our club as a whole,” says Rika. “Especially the student board members, who put so much work into preparing the other students. Their leadership was essential to our success.” 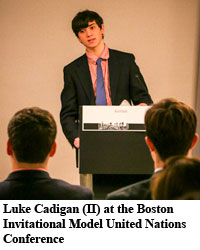 Prior to Model UN conferences, students conduct research from the perspective of their country or figure, to write their position on debate topics. Rika says during club meetings, each student board member is assigned three students who they help by reading their position papers and offering pointers on presentation skills.

Jaime Moore-Carrillo (III) was awarded Best Position Paper for his representation of Bartolome de Cabral in the Spanish Royal Court of 1492. Jaime, who is from Spain, says he was happy to get this topic because he got to explore a part of his country’s history. This was his first Best Position Paper award. “I was very excited. I enjoyed the conference overall, because it was a real intellectual exploration of ideas.”

Under the leadership of Mr. Heath, Rika, and the other club co-heads, Luis Viceira (I) and Carter Wilcox (I), the club’s membership has grown to over 60 active members. Rika’s focus has been encouraging more female students to join, as Model UN has traditionally had more boys participating. The club fosters a fun team atmosphere, and the students are looking forward to the next conference.