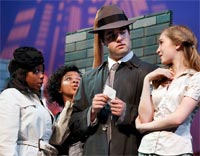 Each year, Milton’s performing arts and music departments collaborate on a challenge that becomes the ultimate crowd pleaser: a full-scale musical, created from start to finish in just two months. This year’s production, City of Angels, will not disappoint.

“The play includes a great script and a fun and challenging score,” says director and performing arts faculty member Kelli Edwards. “Everything is a double entendre—all very clever and funny.”

Premiering on Broadway in 1989, the play is set in Hollywood in the 1940s. The production unfolds as two stories happening simultaneously: a comedy revolving around the filmmaking industry of the time, centered on the screenwriter Stine; and the fictional film world of Stine’s creation—a detective drama and murder mystery.

The show’s cast comprises about 30 students—representatives from all four classes. Staging a musical “takes a village,” as Kelli puts it. Nearly every member of the performing arts and music faculty has a role in creating the magic, from music to choreography, film elements, lights and costumes.

“A traditional musical has a couple of leads and a large chorus,” says Kelli, “but this play has a lot of big, meaty parts for both men and women. That allows us to capitalize on all of the talent we have.”

One of the challenging tasks in staging this musical is visually representing the two worlds that the play revolves around: the “real world” of Hollywood in the 1940s and the film world of Stine’s creation. In this case, the challenge is even greater. Kelli and company will tackle a third element: representing the moments in which reality and fiction intersect. “How very Milton to take something complex and choose to make it even more challenging!” Kelli laughs.

Because the portrayal of the film world happens in black and white—the “real world” in color—the production relies heavily upon the right lighting and costume design. The script also plays with several cinematic conventions. For instance, the set will essentially be the film’s sound studio. “These design choices have informed the directorial choices,” Kelli says.

“Ultimately, this play is about the creative process: how life informs art and art informs life. Stine struggles with his own creativity, trying to maintain a balance between the integrity of his art and the studio’s need to make money. The concept is unusual—a film within a play. This is some students’ first experience acting in a film noir style, with heightened emotions, a bit of melodrama, and characters who are larger than life.”

King Theatre comes alive with City of Angels on Thursday, May 16, and Friday, May 17, at 7:30 p.m. and on Saturday, May 18, at 7 p.m. For ticket information, contact Dar Anastas at dar_anastas@milton.edu