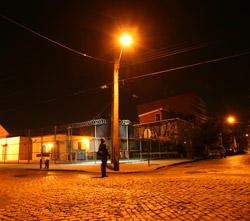 A city skyline at night is an impressive spectacle, but the millions of twinkling lights we’re accustomed to obscure the natural starlight above. In his new documentary, The City Dark, filmmaker Ian Cheney ’98 explores this light pollution and asks: What do we lose when we lose our connection to the night?

“Not long after moving to New York from rural Maine, I heard a surprising statistic: for the first time in the history of the planet, more people were living in cities than in the countryside,” says Ian. “That global shift from rural to urban mirrored my own shift from spending much of my childhood under dark night skies to an adulthood in cities. Surely, I thought, I’m not the only person missing the stars.”

The film covers a wide geographical area—exploring the threat of killer asteroids in Hawaii and tracking hatching turtles along the Florida coast—and features stunning astrophotography and a cast of eclectic scientists, philosophers, historians and lighting designers. Ian says making the documentary was a great learning experience.

“The science of sleep is fascinating, rapidly evolving, and something I knew absolutely nothing about when we began the film,” says Ian. “In a way, what we’re learning about our need for darkness is very intuitive: mankind evolved on a planet with very regular cycles of light and dark, up until only a few hundred years ago. When we disrupt that circadian rhythm, with more light at night and less light than we need during the day, we run risks that we’re only beginning to understand.”

Ian, co-creator of the award-winning documentary King Corn (2007), is looking forward to returning to Boston this week to screen The City Dark at the Museum of Fine Arts from Wednesday, October 5 through Sunday, October 9.