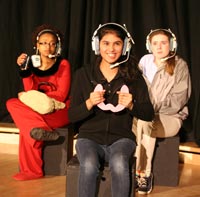 Do you want to laugh or cry? Wonder of the World will help you do both. Richly comic, built on universal themes, as contemporary as today, Wonder of the World is theatre at its best. Milton actors and tech experts render a production that will engage the audience. You’ll feel as though you know the characters and that you share their absurdity as well as their human foibles.

The 1212 Milton Players are presenting Pulitzer-prize winner playwright and Milton alumnus (’88) David Lindsay-Abaire’s Wonder of the World this week. This dark comedy is about a woman in crisis who leaves her marriage and embarks on a journey of self-discovery to Niagara Falls, meeting up with wacky personalities and situations along the way.

“What I like about Lindsay-Abaire’s work is that he has you laughing out loud at things that are funny, but are also outrageous. His argument is that in real life people do outrageous things and if you don’t have conflict, you don’t have drama,” says Peter Parisi, director and performing arts department chair.

The tradition of Milton’s 1212 Plays began over 30 years ago in room 1212 of Warren Hall. The performances evolved from play readings to fully staged productions under the direction of the late faculty member Nina Seidenman. When Warren Hall was renovated, and 1212 became an English classroom, the 1212 productions relocated to Wigg Hall. The space may have changed, but the philosophy is the same: intimate productions with small casts, minimal technical demands, and challenging material for both actors and audience.