When there are no witnesses, and there is no evidence, how sure can you be? 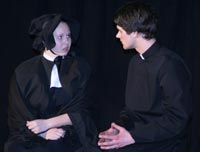 This weekend, Milton’s 1212 players brought John Patrick Shanley’s Pulitzer Prize-winning drama Doubt: A Parable to life in Wigglesworth Hall. Doubt is a story of morality and distrust, rigid assumptions and questionable truths inside a Catholic school in Bronx, New York, in the fall of 1964.

Sister Aloysius is an unflinchingly conservative nun who demands of her students and fellow clergy adherence to strict policies and vigilant moral conduct. Father Flynn is a popular, well-respected, progressive new leader of the parish whom—because of his very nature—Sister Aloysius mistrusts. When she openly questions Father Flynn’s relationship with one of the young students, she brings to bear a firestorm of accusations, discord and hurt inside the small parochial school.

The tradition of Milton’s 1212 Play began over 20 years ago in room 1212 of Warren Hall. The performances evolved from play readings to fully staged productions under the direction of former faculty member Nina Seidenman. When room 1212 was converted into English classrooms, the 1212 productions relocated to Wigg Hall. The space may have changed, but the philosophy is the same: intimate productions with small casts, minimal technical demands, and challenging material for both actors and audience.