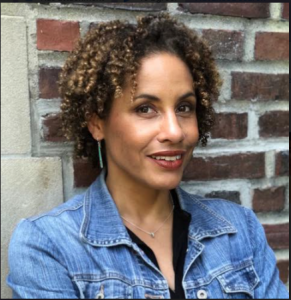 Historian Brenna Wynn Greer spoke about “the perils of symbolic Blackness” and how popular Civil Rights history focuses simplistically on the nonviolent version of Martin Luther King, Jr., rather than the complexities of who he was as a person and an activist. Greer, an associate professor of history at Wellesley College, was this year’s MLK Jr. Day speaker.

Greer said the symbolic King is seen as a kind and gentle Black activist and that, “as a nation, we remain heavily invested in this symbolic King. This is a problem because symbolic King encourages simple and sanitized histories of the Black freedom struggle.”

During the few years before he was assassinated, “King’s criticism of capitalism and his opposition to the Vietnam War made him unpopular not only among U.S. officials but also among Civil Rights activists. This King was a troublemaker, so he was sidelined increasingly as an activist and he was pushed into the shadows as a historical figure,” said Greer.

When King began his Civil Rights work during the Montgomery Bus Boycott in 1955/56 he was just 26 years old, Greer said. He was “inexperienced, overburdened, and unsuspecting at the time he was pushed to the front of the Civil Rights movement. My purpose is to bust through notions that King was born an activist. He developed as an activist and as he did so, his thinking, his objectives, his tactics, and his standing all changed. He was a complex figure with a complex life.”

As he got older, King increasingly viewed “racism in structural terms and pointed to how race and class intercepted to disadvantage black people in America by keeping them poor, less educated, unemployed, incarcerated, and disenfranchised,” said Greer.

Greer said that today, many historians, teachers, and activists are working towards “bringing troublemaker King back into the light—not to replace symbolic King but to integrate those two figures.”

Greer is a historian of race, gender, and culture in the twentieth century United States, who explores historical connections between capitalism, social movements, and visual culture. Her first book, Represented: The Black Imagemakers Who Reimagined African American Citizenship, examines the historical circumstances that made the media representation of black citizenship good business in the post-World War II era. A recipient of several teaching awards and major fellowships from the ACLS, Woodrow Wilson Foundation, and Andrew W. Mellon Foundation, Greer’s work has been featured in The New York Times, The Nation, the Daily Mail, and the Columbia Journalism Review.