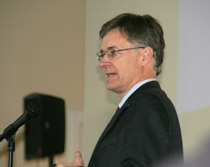 Bruce Walker, M.D., professor of medicine, director of the Harvard Initiative for Global Health at Harvard University, esteemed researcher and Milton parent spoke with students today to honor World AIDS Day 2008.  He talked with student about the progress of his AIDS clinical research. Dr. Walker seeks to determine how the immune system controls chronic viral infections and to augment antiviral immunity for therapeutic benefit.

Bruce Walker says he is now doing the most important work of his career as a physician-scientist combating AIDS.

He is leading an international research effort to understand how some rare people who are infected with HIV but have never been treated can fight the virus with their immune system. He hopes such knowledge could lead to a vaccine and new treatments for the disease.

He also has spearheaded the creation of advanced clinical and laboratory facilities at the front lines of the AIDS epidemic in South Africa, where he and his colleagues at Harvard routinely collaborate with the medical, scientific, and support staff.

Walker is motivated today by the same drive that brought him to medicine more than three decades ago. “As a physician you have the chance to make a difference,” Walker said, “to be involved in people’s lives at really critical junctures…and that is a privilege, honor, and a really precious thing to be able to do.”