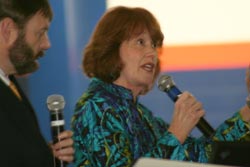 Dr. Jenkins has been the principal investigator of the Independent School Gender Project, a project conceived by Ellie Griffin, Milton’s director of health and counseling services. The project’s goal is to address equity issues for men and women, and boys and girls, in independent schools.

According to the Human Development Institute, “the mission of the Independent School Gender Project was established in 1997 to ‘create a framework of research, assessment, and strategies for change through which schools can address gender based practices and attitudes effecting girls and women in order to promote whole and healthy environments for both females and males in our schools.’”

The Project has gathered survey data from students and faculty in independent schools across the United States and Canada. Dr. Jenkins shared the results of the survey with the Milton community during Wednesday’s assembly in the Fitzgibbons Convocation Center. She has presented these results, over the years, at national conferences such as the National Association of Independent Schools, the Association of Boarding Schools and the Hotchkiss Conference on Women and Girls.

Earning a degree in English from Wellesley College, she taught high school in New Hampshire before obtaining her masters of English Literature at Middlebury’s Bread Loaf School and her doctorate in Counseling Psychology at Rutgers University.

Dr. Jeff Jenkins also presented during Wednesday’s assembly. He has served as the research and statistics consultant for the Independent School Gender Project since its inception.  He was consulted in developing the survey instruments, performed statistical analyses of the data, interpreted the results, and wrote the technical reports for the project over the years.