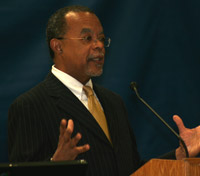 Dr. Henry Louis Gates, Jr. of Harvard University talked with students on Wednesday as the 2007 Martin Luther King Speaker. After addressing students in the Fitzgibbons Convocation Center he met with them for questions and further discussion in Straus Library during third period.

One of the most influential American cultural critics, Dr. Gates is the W. E. B. Du Bois Professor of the Humanities and the Director of the W. E. B. Du Bois Institute for African and African American Research at Harvard. He is widely acknowledged for moving African American studies from the ideological positioning of the 1970s and ’80s to a scholarly sphere. Dr. Gates has authored and edited several books and written numerous articles for The New Yorker, Time Magazine,The New Republic and The New York Times. He is also the editor of Transition magazine, an international review of African, Caribbean, and African American politics.

Through scholarly efforts such as publishing bibliographies of noted writers—Nigeria’s Wole Soyinka, for example—and republishing historical texts like Harriet Wilson’s Our Nig; or Sketches from the Life of a Free Black, written in 1854, Dr. Gates has defined an African American literary and cultural tradition. He also authenticated and facilitated the publication of The Bondwoman’s Narrative by Hannah Crafts, the only known novel by a female African American slave and possibly the first novel by an African American woman.

A member of the American Philosophical Society, the Academy of Arts and Sciences, the African Literature Association, and the Association for the Study of Afro-American Life and History, Dr. Gates also serves on numerous academic and civic boards and committees. In 1997 he was named one of Time Magazine‘s most influential Americans. His honors and grants include a MacArthur Foundation “genius grant,” the George Polk Award for Social Commentary, a National Humanities Medal, and election to the American Academy of Arts.