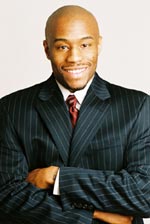 Dr. Marc Lamont Hill — activist, scholar and cultural critic — spoke to Milton students yesterday as the Martin Luther King speaker of 2009.  Dr. Hill’s work, which covers topics such as hip-hop culture, politics, sexuality, education and religion, has appeared in numerous journals, magazines, books and anthologies. He has lectured widely and provides regular commentary for media outlets like NPR, The Washington Post, Essence magazine and The New York Times. He is a political contributor for Fox News Channel, where he appears on programs such as The O’Reilly Factor and Hannity & Colmes. Prior to joining Fox News, Dr. Hill was a regular guest on CNN, MSNBC and CourtTV.

Dr. Hill’s central “raison d’etre,” in the world of ideas, as he explains on his Web site, is to help us to imagine the world differently and better in order to alleviate suffering and create a more safe and democratic space for everyone.

Dr. Hill is assistant professor of urban education and American studies at Temple University and he also teaches in the anthropology department. He holds a Ph.D. from the University of Pennsylvania. Dr. Hill’s research focuses on the intersections between youth culture, identity and educational processes.

Since his days as a youth in Philadelphia, Dr. Hill has been a social justice activist and organizer. He is a founding board member of My5th, a non-profit organization devoted to educating youth about their legal rights and responsibilities. Dr. Hill also works closely with the ACLU Drug Reform Project, focusing on drug informant policy. In addition to his political work, Dr. Hill continues to work directly with African American and Latino youth. In 2001, he started a literacy project that uses hip-hop culture to increase school engagement and reading skills among high school students. He also continues to organize and teach adult literacy courses for high school dropouts in Philadelphia and Camden.