Dr. Öngür On the Science Behind Mental Illness 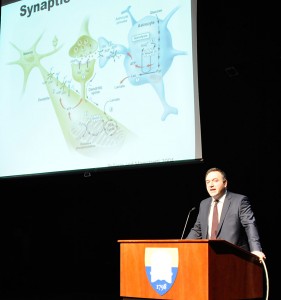 Dr. Dost Öngür, this year’s Science Assembly Speaker, talked with students about his research into the causes of schizophrenia. Chief of the Psychotic Disorders Division at McLean Hospital, Dr. Öngür addressed mental illness in general, as well as the associated stigmas.

“Mental illnesses are common. They are not a small thing we can ignore, but rather a significant public health issue, and people need help,” said Dr. Öngür. “The best way to deal with mental illness is head on—the way we approach any other medical condition.” Dr. Öngür cited worldwide statistics: 350 million people suffer from depression, and 48 million live with dementia.

Dr. Öngür explained that there is no test or imaging that can help diagnose a condition like schizophrenia. “We know it when we see it, but we don’t know how to measure it scientifically,” he says.

This challenge drew Dr. Öngür to delve more deeply into brain chemistry research. One focus is looking at mitochondrial DNA and the role it plays. Although imaging can’t diagnose schizophrenia, MRIs can be used to measure certain chemical aspects of brain function.

Dr. Öngür is an associate professor of psychiatry at Harvard Medical School and the author of more than 80 articles on research into the neurobiology of bipolar disorder and schizophrenia. In addition to his clinical work at McLean, he receives funding from the National Institute of Mental Health and others for his research: using brain-imaging techniques to study chemical abnormalities in patients with schizophrenia and bipolar disorder. He has won awards from Harvard Medical School for his teaching and mentoring of medical students and residents. He also serves as the associate editor of JAMA Psychiatry.