Dr. Reza Aslan Is This Year’s Speaker for Religious Understanding 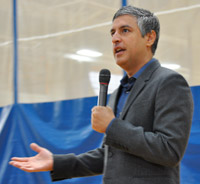 Religious scholar Dr. Reza Aslan, who wrote the bestseller Zealot: The Life and Times of Jesus of Nazareth, spoke with students as this year’s Class of 1952 Endowed Speaker for Religious Understanding. Dr. Aslan travels the world speaking to people about religion, and particularly about understanding religious conflicts.

“A huge debate is going on in the United States about how responsible Islam is for acts of violence,” says Dr. Aslan. “As with most debates, it’s become very polarized and simplistic, the conversation does not have a lot of nuance. But if we are going to understand what is going on in the world and, more importantly, if we are going to address it and come up with a way to deal with the role of religion in violence around the world, we have to bring nuance to it, we have to have a better understanding of what religion is.”

Dr. Aslan was born in Iran and moved to the United States as a child. He describes his mother as a “lukewarm Muslim” and his father as an “exuberant atheist.” During his childhood, he distanced himself from his culture and religion to fit in. Eventually, he developed a deep interest in learning about religion. He earned a bachelor’s in religious studies from Santa Clara University, a master’s of theological studies from Harvard University and a Ph.D. in the sociology of religions from the University of California, Santa Barbara.

Dr. Aslan says the key to understanding religions is understanding that “No one really gets to decide who is and who is not a Christian. Who is and who is not a Jew. Who is and is not a Muslim. This is the thing about religions: If it is a matter of identity, if it’s about who you are as a person, than anyone who calls himself a Muslim is Muslim, anyone who calls himself a Christian is a Christian and anyone who calls himself a Jew is a Jew. And while other Christians and Jews and Muslims may disagree, too bad. Nobody gets to define your own spirituality-who you say you are as a person, your identity. So whenever we are confronted with acts of violence in the name of a religion, people who share that religion desire to simply distance ourselves from it, to say ‘that is not really my religion.’ That is understandable but it is also incorrect.”

Speaking about anti-Muslim sentiment in the United States, Dr. Aslan compared it to various historical periods when vehement anti-Catholic and anti-Jewish sentiments and actions prevailed. Eventually Catholics and Jews were accepted and Dr. Aslan says the same will happen for Muslims.

“Only one percent of the American population is Muslim. So we don’t know many Muslims. It’s very hard to break down that wall that makes someone just an ‘other.’ How do you break down that wall? Through relationships, by getting to know one another. It’s a slow process, but it’s an inevitable one, and it’s a process that puts a burden on you. … Change is this country comes doesn’t from the top down, it comes from the bottom up. It means that if you want to live in a country that is truly pluralistic, that is truly tolerant, that absorbs every culture, every religion, every ethnicity, that creates this melting pot that fills us with pride, then every individual in this country has the responsibility to do it himself and herself. It’s your responsibility to go out and get to know someone of a difference race, of a different culture and of a different religion. It’s your responsibility to stop ‘other-rising’ people who don’t look like you, who don’t pray like you or who don’t act like you. And that is the process of how outsiders become insiders. It’s always been the case in the United States, and it will be the case with Muslims.”

Dr. Aslan is professor of creative writing at the University of California, Riverside and serves on the board of trustees for the Chicago Theological Seminary. He also is the founder of AslanMedia, a social media network for news and entertainment about the Middle East and the world, and co-founder and Chief Creative Officer of BoomGen Studios. He lives in Los Angeles with his wife, author and entrepreneur, Jessica Jackley and their three sons.