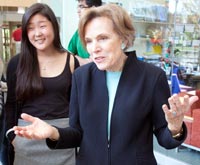 World-renowned marine biologist and ocean explorer Dr. Sylvia Earle shared her passion and wonder of discovery with students during the science department’s assembly.  An advocate for the research and protection of the ocean, Dr. Earle articulated a positive outlook on the future of “our most precious and largely unexplored frontiers—our seas.”

“If I could choose a time to arrive on the planet I would choose now,” says Dr. Earle. “Despite the bad news about our climate, the good news is we have the power and knowledge to shape the future in a way our predecessors did not. This is the best time because we have the ability to know who we are, where we’ve been and where we are going. depending on what we do or don’t do.”

The 77-year-old Dr. Earle understated her astonishing and extensive travel and diving itinerary—one week she might be in Hawaii, the next a deep-water Russian lake. She was effusive of her love of submersible diving machines, how she enjoys driving them and hopes that some day, using them to get to know oceans becomes a more commonplace experience for people.

Stressing that we’ve only just begun to scratch the service of what is under the “skin” of the ocean, Dr. Earle expressed her hope that ocean exploration becomes as expansive as the space program has been. And she reminded students about human dependency on the vast oceans, even though populations of people have never even seen an ocean.

“Whether you can see the ocean or touch the ocean,” says Dr. Earle, “the ocean touches us every day, simply providing the oxygen you take in with every breath.”

Describing some of the threats to the ocean ecosystem such as overfishing, using fossil fuels, or discarding human waste in the world’s oceans, Dr. Earle issued a challenge to students before continuing the discussion with science classes in the Pritzker Science Center.

“The world is in your hands,” she told students. “Never again will there be this good a chance to bring about change. You’ve got a job to do.”

Dr. Earle is the co-founder and director of Deep Ocean Engineering, Inc. and the president of Deep Ocean Exploration and Research, Inc. Formerly the chief scientist at the National Oceanic and Atmospheric Administration, Sylvia Earle is an explorer-in-residence at National Geographic. She serves as the first female honorary president of The Explorer’s Club. Recognized by the Library of Congress as a “Living Legend” and inducted into the National Women’s Hall of Fame, she is the author of more than 100 publications concerning marine science and technology, including the books, Sea Change (1995) and Wild Ocean (1999). She has participated in numerous television productions and presented scientific, technical, and general interest lectures in more than 60 countries. Her books for children include Hello Fish; Sea Critters; and Dive!, a winner of five awards for excellence. Most recently, Dr. Earle became the face of Google Oceans, Google’s downloadable, interactive guide to the deepest depths of the sea.