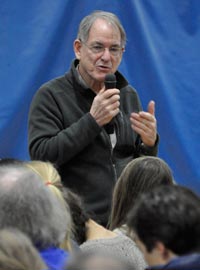 Speakers this year included a string theorist; two experts on the crisis in the Ukraine; social entrepreneurs working on issues such as educational reform and sustainable food policy; environmental activists; an inventor of medical devices; a member of the Massachusetts National Guard; social justice and political activists; and the chief of trauma at Massachusetts General Hospital, who discussed lessons learned from the Boston Marathon bombings.

Mr. Bowles’ talk was titled “The Origin and Future of Economic Inequality: The Good News.” He is a research professor and director of the behavioral science program at the Santa Fe Institute. He is also professor of economics at the University of Siena. He taught economics at Harvard from 1965 to 1973 and at the University of Massachusetts, where he is now emeritus professor. Bowles’ current research includes theoretical and empirical studies of political hierarchy and wealth inequality and their evolution over the very long run. He has served as an economic advisor to the governments of Cuba, South Africa and Greece, to presidential candidates Robert F. Kennedy and Jesse Jackson, to the Congress of South African Trade Unions and to South African President Nelson Mandela.

Surrounding the keynote speaker, students chose from among many presenters during three time blocks in the day. Exchanges that occur on Seminar Day stimulate ideas and conversations over weeks to come. Held every other year, Seminar Day alternates with Community Service Day—another occasion that encourages students to think beyond their immediate community and concern themselves with the complexity and opportunity afforded by the world.