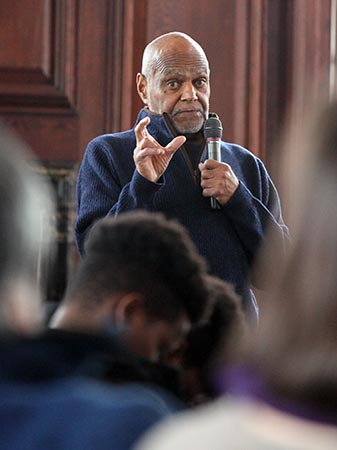 The meaning of that phrase in the constitution’s preamble has shifted over the years, beginning with white, male property owners at the founding of the U.S., eventually expanding to include women and minorities, and constricting with immigration restrictions, Dr. Moses said.

“In spite of itself, the country has expanded the idea of ‘we the people’ over the years,” he said. “I see the country as lurching: moving forward and stepping back. It is a constant question: For whom does the constitution exist? We need a constitution that is appropriate for the 21st century and going forward.”

Dr. Moses visited Milton as the Martin Luther King Jr. Day speaker. A contemporary of Dr. King, Dr. Moses is a math educator and was a leader in the Student Nonviolent Coordinating Committee (SNCC) during the civil rights movement of the 1960s. He felt inspired to join the movement as coverage of sit-in protests throughout the country showed young black men making bold, public statements about inequality. “They looked the way I felt,” Dr. Moses said.

Voter suppression laws and practices throughout the South during the Jim Crow era took advantage of educational inequality, denying rights for black people who could not read or write. Dr. Moses viewed language illiteracy as a barrier to citizenship and participation in politics.

Over the decades, as industrial manufacturing jobs declined and the Information Age emerged, Dr. Moses saw a need to improve access to competitive mathematical skills for low-income students and students of color. He founded the Algebra Project Inc. after receiving a MacArthur Fellowship in 1982, with the goal of providing middle school-age students with the algebra skills to qualify for honors math and science classes in high school. The program reaches tens of thousands of students nationwide.

“This shift to a technological age involves a new literacy in math,” he said. “Without this literacy, people are not going to have access to the economic opportunities and democratic institutions of the 21st century.”

Dr. Moses received his bachelor’s degree from Hamilton College and his Ph.D. from Harvard University. He taught math at the Horace Mann School in the Bronx before joining the SNCC and has taught in Mississippi, Florida and Tanzania. Dr. Moses is co-author, with Charles E. Cobb Jr., of the book Radical Equations—Civil Rights from Mississippi to the Algebra Project. He co-edited Quality Education as a Constitutional Right—creating a grassroots movement to transform public schools. He has taught at Princeton University and as an adjunct professor at New York University’s School of Law. Dr. Moses serves on the Education Advisory of the Mathematical Sciences Research Institute. He has received numerous awards recognizing his activism and educational leadership.