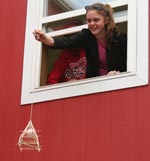 As part of their introduction to the study of momentum and freefall acceleration, Milton’s Class IV physics students undertake the challenging task of protecting a raw egg dropped from approximately 15 feet using materials such as wooden sticks, rubber bands, paper cups and string. Working with a partner, each student must design and build an “egg protector” device with the goal of keeping the egg in one piece upon impact. The students take what they have learned about momentum up to this point and apply that knowledge to creating their contraptions.

As Brad Moriarty, science faculty member, explains, “Our goal here is to do two things. First, we try to maximize the amount of air resistance involved so that it slows the momentum of the egg. At the same time we’re attempting to maximize the amount of time between the impact of the device and when the egg actually stops moving, which causes the device to act like the crumple zone of a car.” Students venture to the top floor of the science building to see how their invention fares.

“What we do is give the students one theory to work with,” Tom Sando, also of the science department, shares. “At this age the students are good about taking their own common sense and applying that as well, so they meld the theory with common sense and often come up with pretty creative solutions. We do a first trial, or pre-test of the devices on one round of drops, then we go in and debrief about what happened. Once the students have reworked their devices a bit—using what they learned from round one— they take another try at it. We typically have a much higher success rate the second time around.”

Students in other sections—applying the same theories—create devices for the egg to fall onto, so that rather than protecting the egg during the fall, they lessen the impact from the ground.

Later in this unit, students will be working with data derived from the science department’s newly acquired Explorer data recorder and accelerometer. The equipment is used to record changes in velocity and will be worn by Milton faculty member Steve Feldman during skydives to determine the speeds at which a person travels during freefall and under parachute.