Ellen Sukharevsky (II) is Following the Squids From Space 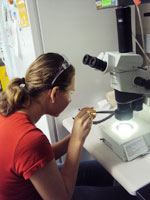 The squids in space returned to Earth on the final two space shuttle voyages, but the experiments on the unique Hawaiian bobtail squid continue. Ellen Sukharevsky (II) is playing an important role. Over the summer, Ellen returned to the Space Life Science Laboratory, a NASA facility at the Kennedy Space Center in Florida, to assist scientists.

“My favorite part was taking care of the squid in their tanks. I did that every morning—cleaning the tanks and checking to see if babies hatched,” says Ellen. “The timing of hatching is important, because the experiments have to be done right when they are born.”

Ellen was comfortable working in a professional lab, performing a variety of scientific experiments and recording data. “The most challenging part of working in the lab was the technology, which didn’t always cooperate!” says Ellen.

Her opportunity to work on a space shuttle experiment came about because of science faculty member Ned Bean. When Ned learned about the work of Dr. Jamie Foster, who leads the squid project, he arranged for a group of Milton students to do preliminary work in the Pritzker Science Center. The bobtail squid has a unique light organ that glows at night, powered by a particular bioluminescent bacteria (Vibrio fishceri) that the squid draws in from the surrounding water. Every day it expels the old bacteria and takes in a new batch. Newly born squid can’t produce the light, but within several hours they become bioluminescent. This development provides scientists a close look at morphogenesis, which is the biological process that causes an organism to develop its shape—one of the fundamentals of development biology. Dr. Foster’s work is focused on what happens to this morphogenesis process under micro-gravity conditions. Her work could open up a new area of scientific discovery about how gravity affects animal and plant development.

Last winter, Ellen and other students worked hard to maintain the exact living conditions the squid need to survive. The squid’s natural habitat is the shallow water around the Hawaiian Islands. Every night, a student or faculty member fed the two-inch long squid their diet of fresh common shore shrimp. The first major accomplishment came when the female squid laid eggs. Ned and the students then conducted experiments on the eggs. Over spring break the group traveled to Florida to visit and work in the lab. Later, back in Milton, they waited anxiously for the squid to be launched into orbit.

Ellen loves science and hopes to pursue an education in medicine. She works in a hospital part-time, and next week she travels to a mountain village in the Dominican Republic with a group of local doctors. The group will be addressing hygiene issues in the community, and Ellen is the only student going on the trip.

Ellen says the squid data is still being analyzed, and she may return to Florida over spring break. If the experiments worked, she will contribute to the published results—an exciting prospect for a student just at the start of a promising future in science.