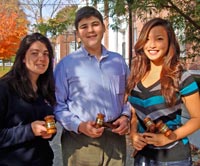 Junior Statesmen of America is a national non-profit foundation with 500,000 student leaders from high schools across the country. Members of Milton’s JSA chapter—which was initiated at the start of this school year—meet once a week to discuss hot topics such as the upcoming 2010 midterm elections, the “Don’t Ask Don’t Tell” policy, and lowering the drinking age to 16.

“Although we only recently activated the club on campus,” says Kitty Lan, one of the club’s founding members, “it has already drawn many of Milton’s students, encouraging participation, understanding and bipartisanship in politics.”