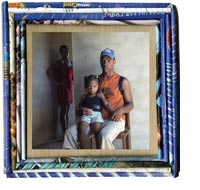 On Tuesday, May 5, Milton’s Nesto Gallery opened its doors to Estou Te Esperando (I Am Waiting For You), an exhibition by documentary artist Emma Raynes.  As a Lewis Hine Fellow at the Center for Documentary Studies, Emma developed a letter-writing project with families of sugarcane workers in Minas Gerais, Brazil. The exhibit that runs in the Gallery from May 5 to May 29 is a product of her work on this project.

“I began by making photographs and sound recordings of the workers with their children before they departed to cut sugarcane,” said Emma. “While working on this project, I lived with families whose lives and experiences are reflected in these photographs.  The work was driven by their openness, generosity, and enthusiasm.

Emma Raynes graduated in 2004 from Bowdoin College where she studied art history. In 2005, she studied at the Center for Documentary Studies, and the following year she completed a program in General Photographic Studies at the International Center of Photography in New York City. Emma is a documentary artist who uses photography, audio, video, book arts and installation. She collaborates with the subjects of her documentary work, encouraging individuals and communities to be participants in the documentary process. She has worked on projects in Northern Ireland, China, Nepal, South India, Brazil, North Carolina, and New York.  Emma is currently a graduate student of cultural anthropology at the New School for Social Research in New York.