Excellence On and Off the Field: Student-Athletes Honored

The Athletics Department celebrated Milton’s athletes virtually during the annual M-Club Gala on Wednesday. Class I students were presented awards for their outstanding performance in athletics. 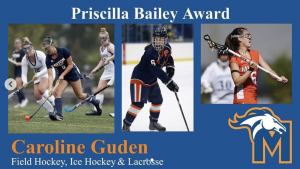 Caroline Guden, an outstanding athlete in field hockey, ice hockey and lacrosse received the Priscilla Bailey Award. The award recognizes an athlete who “has been a most valuable asset to Milton Academy athletics and community, and who demonstrates exceptional individual skills and teamwork as well as sportsmanship.” Guden’s field hockey coach described her as “always giving 100 percent. She empowered her teammates. They could count on her to create a spark and make things happen.” 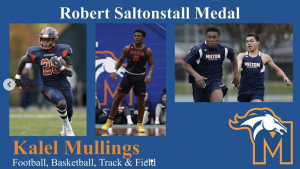 Football standout Kalel Mullings received the Robert Saltonstall Medal. Over Milton’s history, the Saltonstall has indicated “a distinguished record in all-around physical activity, with emphasis on leadership by example, conscientious training, good body mechanics, and observance of the code of the true sportsman.” In addition to his feats on the football field, Mullings excelled on the basketball court as a defender, and on the track and field team, where he was an impact member on medal-winning relay teams and running the 200M. His football coach said he was the most “kind, considerate, sincere, and friendly player who made it a point to know every player on the roster and made younger players feel important and valued.” 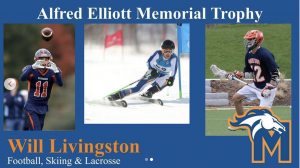 Will Livingston, who was on the ski team and played football and lacrosse, received the Alfred Elliott Award. This award honors an athlete whose “extraordinary self-sacrifice and unselfish devotion to the best interests of his teams; a boy who, regardless of skill, with inspiring example—either in practice or in competition—has given most unsparingly of himself for the good of all.” Livingston’s ski coach said he “demonstrated extraordinary self-sacrifice and unselfish devotion to his peers, coaches, and team. He represented Milton Academy as a model athlete on and off campus.” 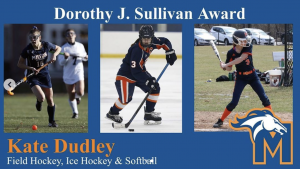 Kate Dudley, who played field hockey, ice hockey and softball, won the Dorothy J Sullivan Award. This award signifies “good sportsmanship, leadership, dedication and commitment to athletics at Milton,” as well as being an “inspiration and model for others.” During her Milton ice hockey career, Dudley, described by her hockey coach as “arguably the most impactful player this season” earned a spot on the All-ISL team, was named to the Patriot Ledger All-Scholastic team and earned an Honorable Mention for the All-New England Team (NEPSAC Large School).

The ISL Awards for Excellence went to Zoe Katz and Shane O’Sullivan. This annual award recognizes student athletes for exhibiting the ISL ideals of integrity, sportsmanship, fair play, and good citizenship, while participating as multi-sport athletes during their Independent School League career.

Coach Jamie LaRochelle received the Marijke D. Alsbach Coaching Award for outstanding coaching as well as dedication to a program and to student athletes. It’s given annually to a coach who models the ideals of the coaching profession, leads by example, demonstrates knowledge and technical skills, as well as commitment to the physical and social well-being of the athletes.