Expanding the Narrative for Muslim Women 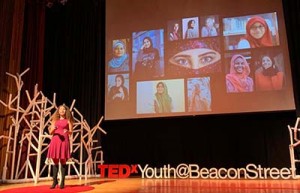 Using research conducted on three continents, Jana Amin ’21 has been working for nearly two years to deepen the understanding of a twentieth-century Egyptian princess whose story was only partially told.

Princess Fawzia Fuad, at one point the queen of Iran, received worldwide attention for her beauty—she was often compared with Western movie stars—during the glamorized coverage of her 1939 political marriage to Iran’s crown prince, Mohammed Reza Pahlavi.

Jana’s research of Egyptian documents unveiled a more complex princess than the one portrayed in British and American press—a nurse who was involved in Egypt’s healthcare system and a leader who galvanized Egyptian women to fight for their rights. Jana’s work was featured in an exhibit at the American University in Cairo (AUC), and she conducted research in Egypt, the U.K., and the United States.

“Cecil Beaton, who was one of the photographers for the British royal family, went to photograph her in Iran. He described her as a ‘fair-skinned princess with sad eyes,’ and the photos show her near a gate. It almost looks like she’s in a cage,” says Jana. “And so it was fascinating to get a different perspective on her and to see some of the different roles she played.”

Jana’s interest in Fawzia began during the summer before her sophomore year when she attended a history camp run by The Concord Review, a publication of research papers by secondary students. She had to choose a historical subject to research in depth and wanted to focus her research on an issue related to Egyptian women. Jana, who is Egyptian and Muslim, wanted to focus on an Islamic topic, began to learn about Fawzia. International media described the princess as “one of the world’s most beautiful women”; coverage of her wedding focused on its opulence.

While visiting family and friends in England and Egypt, Jana was able to visit museums and archives to view original documents, including an album in the St. Antony’s College Middle East Archives at Oxford, which documented the wedding between Fawzia and the crown prince of Iran and the diplomatic visits that led up to it. It wasn’t until she went to the AUC that Jana found coverage of Fawzia’s life that went beyond her beauty and her wedding.

“I went to their rare books library and found that she was featured in a lot of the local media, especially this one magazine called Al-Musawar, which basically translates to ‘the picture.’ Here, she was finally covered for her work,” Jana says. “She was not a political pawn, no longer someone who was without a voice, no longer someone who was just getting married. She was a nurse who advocated for women and children’s healthcare. She encouraged women to get involved in Egyptian politics.”

The team at AUC’s rare books library was impressed with Jana’s research and invited her to present it. They also wanted to expand her research into an exhibit, so she worked with the team on curating an exhibit that opened last summer at the Cairo university. The preservation team taught Jana about the care that goes into preserving historical artifacts and using them to tell a story. The exhibit received positive media coverage and Jana is working to see if she can bring it to other research centers or museums.

She has also been giving talks about her research—including a TEDxYouth talk in Boston—about changing the narrative around Muslim women, and the importance of maintaining archives to preserve history. “We can use archives to bring some validity to the human experience and to connect people with the past,” she says.