Exploring Mathematics With Both Numbers and Words 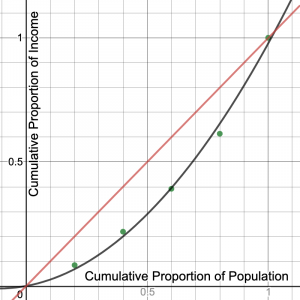 Writing about math is an approach used by Milton math teachers to get students to dive deep into the material and then articulate it—beyond just numbers, formulas, and graphs. Earlier this semester, Honors Calculus students researched, calculated, and wrote about the Gini Index, a measure of income distribution across a population, for a country of their choice.

“We wanted to make the study of calculus relevant, and income distribution and income inequality are topics we read about all the time in the news,” said math faculty member Jackie Bonenfant. “This was a way to allow students to explore an important and pressing topic, while also encouraging them to ask questions about their world. What government policies, practices, and laws might impact income distribution? Are we satisfied with current levels of income distribution and, if not, what could we do to change things?”

“In general, a small percentage of the population holds a lot of the wealth, while a bigger percentage holds less wealth, and to calculate the Gini index you determine the difference between this income distribution and an ideal situation, which would look more like a linear line,” said Malouf. “I thought Switzerland would be interesting to look at because it’s known as a wealthy country and everything from the outside looks very put together, but there is some income inequality there.”

After crunching the data and plotting out the results, Malouf said writing the paper “was easier than I expected because I could compare my results to stuff in the real world and put it to use in real ways.”

Bonenfant said that mathematics is a language with its own symbols and syntax, so writing the paper in English is “sort of like translating the symbols into words. Being able to explain your reasoning and your approach, or justify your conclusions, is important in any discipline, mathematics included. There are many scientific journals in which scientists and mathematicians explain their work, so writing the paper on the Gini index was like a scaled-down version of the journal paper.”