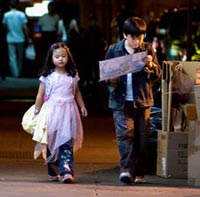 Children of Invention, a film written and directed by alumnus Tze Chun, will premiere at the 2009 Sundance Film Festival this week in Park City, Utah. Based on Tze’s own award-winning short film, Windowbreaker, which screened at the 2007 Sundance Film Festival, Children of Invention is a drama about the influence of an adult world on children, the immigrant experience and shortcuts to the American dream.

“When I wrote the film, I was writing a personal story about the world I grew up in—a subculture of Americans trying to get-rich-quick in order to get themselves out of a financial hole,” said Tze. “I didn’t foresee the current financial crisis. But with the economy tanking now and foreclosures going through the roof, it seems like everyone’s living through some version of what the Chengs go through in the film.”

Many Milton alums were part of the effort: Milton alumnus Paul Bercovitch ’98 worked on the sound design for the film; Emmy Award-winner Cara McKenney ’98 produced the main titles; Tze-Cheng Chun ’02 crewed for the film; and younger brother of Victoria Chen (IV), Michael Chen, stars in the movie along with Cindy Cheung and Crystal Chiu.