Felipe Fernández-Armesto is the 2008 Heyburn Lecturer 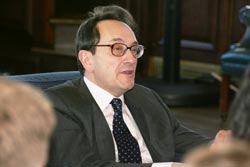 According to the New York Times, Dr. Fernández-Armesto, who spoke to students as the Heyburn lecturer on December 3, “makes history a smart art.”  His print journalism makes him “one of the most formidable political commentators in the world” (The Independent).  His broadcasting is “the voice of reason” (The Guardian). Reviewers have likened him to Montesquieu, Gibbon, Toynbee and Braudel. Among his prizes are the World History Association Book Prize for Pathfinders, the Tercentenary Medal of the Society of Antiquaries for services to scholarship, the Caird Medal and the John Carter Brown Medal for his work on colonial and maritime history, the Premio Nacional de Investigación of the Sociedad Geográfica Española for his work on environmental history, the Premio Nacional de Gastronomía for his book on the history of food, the IACP Prize for best food-writing, and the Commendation of the Library Association of the UK for his contribution to works of reference. Dr. Fernández-Armesto has been accepted as a peer by fellow-specialists in many fields, from global history and environmental history, through American history, the history of cartography, and the history of language. He has done pioneering work in all these subjects and his work has been translated into 25 languages. Dr. Fernández-Armesto has given major endowed lectures at many universities, including Harvard, Brown, Dartmouth, and the Universities of London, Edinburgh, Pennsylvania and Minnesota.  He earned master´s and doctoral degrees from Oxford (where he spent most of his teaching career) and honorary doctorates from La Trobe and the Universidad de los Andes; he is a Fellow of the Society of Antiquaries, the Royal Historical Society, the Royal Society of Arts, and the Netherlands Institute for Advanced Study in the Humanities and Social Sciences, and a Life Member of the American Historical Association.  Dr. Fernández-Armesto is Prince of Asturias Professor at Tufts University and Visiting Professor of Global Environmental History and Professorial Fellow of Queen Mary, University of London.