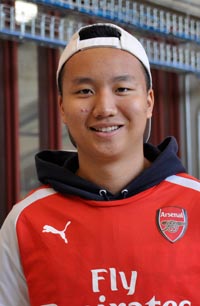 When George Luo (I) wrote his first screenplay at the end of his freshman year at Milton, he rounded up about 20 people who said they’d be interested in helping him make the film. Over that summer, interest fizzled, and George never made the movie, which is OK, he jokes, because, “It was probably the worst screenplay of all time.”

A few more attempts failed; it was hard to manage the process alone. So, during sophomore year, George and some friends founded the Hollywood Filmmaking Club, which has lent structure to film projects, he says.

Last year, the club, which is made up of actors and students interested in directing and writing, worked together to make George’s film, “Under the Wound,” which was accepted in several film festivals. Over that Columbus Day weekend, six members of the club went to New York City, where the 20-minute-long drama was an official selection of the All American High School Film Festival, an event that honors the best of high-school films from all over the country.

“It’s a really big festival,” says performing arts faculty member Shane Fuller, who advises the club. “It was really cool to see the students taking on the project as their own and doing all the work. They did all the scheduling, filming, casting, lighting and editing. The film itself turned out really nice. The attention to detail is really great.”

“Under the Wound” explores the damage that unfurls from a single lie. George wrote and directed it. He was inspired by a critically acclaimed Danish film called “The Hunt.”

After early missteps in making movies, George felt motivated to learn everything he could in film classes. Shane’s advanced filmmaking class created a film called “Abstraction,” which was accepted into several festivals; George, Conor Greene (I) and Joey Leung ’17 won the best cinematography award at the Hotchkiss Film Festival in the spring for “Abstraction.”

George has always loved watching movies, but didn’t grasp the filmmaking process until his second day at Milton, when he saw a film crew shooting on campus. “I don’t remember if they were making a TV show, a commercial or a film, but they were out in front of Forbes. And I saw the giant camera, and those lights and thought, that’s what I want to do,” he says.

Taking what he learned from film classes, studying lighting and sound tips on the internet, George’s first film at Milton was a short horror movie. For “Under the Wound,” he wanted to create something longer, which was possible because every member of the club got involved.

“They put a lot of time in and sacrificed several weekends for a project I started, which is incredible,” George says. Because the club was fully involved, George says he was able to focus on small details, a focus that his favorite directors, Stanley Kubrick and Christopher Nolan, are known for. George’s goal is to continue making movies with social messages, and to be conscious of improving gender and racial diversity in film.

The All American High School Film Festival is an opportunity to hear from established filmmakers, visit a college fair with a focus on film programs, and absorb the work of other student artists.