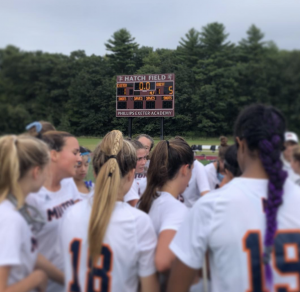 The varsity field hockey team is impressing fans early in the fall season with definitive wins (4-1) against strong teams. In one of its first games, against Phillips Exeter, the team scored in the first 30 seconds, dominating the entire game to win 5-1, which “set the tone for the season” according to co-captain Caroline Guden ’20.

Caroline, who plays midfield, and co-captain Charlotte Jordan ’20, who plays forward, say they are trying to lead the team by example, focusing on “instilling confidence in ourselves, knowing we are a good team and we can win.”

The Exeter win was followed by Milton’s first ISL win against Lawrence Academy and then a win against Thayer Academy this past Tuesday.

“We have a lot of depth, where in the past that was something we lacked,” says Caroline. “At the end of the Thayer game, we had all our starters off the field and we were still dominating.”

The day after the Thayer win, the team played Deerfield Academy on tired legs and faced its first loss (2-3). “It was a close game. They are a well-coached team and we didn’t have enough energy. The game exposed some of our weaknesses and what we need to work on,” says Caroline.

Charlotte says in a way the “loss was good for us because in our next game we will push ourselves harder.” The team travels on Saturday to face off against Middlesex.