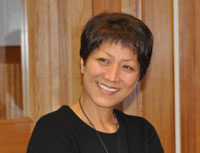 Students filled King Theatre on Wednesday morning to hear from Korean-born filmmaker Deann Borshay Liem. Milton’s thirteenth speaker in the Hong Kong Distinguished Lecture Series, Ms. Liem told her story as a Korean child adopted by an American family. Unique to her story, however, she “came to America both literally and metaphorically walking in another girl’s shoes.”

In 1966, eight-year-old Deann was sent as an adopted orphan to the United States, but she made the trip under another child’s identity; Deann’s passport and documentation said that her name was Cha Jung Hee, the name of another child at the orphanage. She was sent to America—told to keep her true identity hidden from her adoptive parents—wearing the clothing that the Borshay family had sent for Cha Jung Hee.

“Having grown up as someone I wasn’t, I never fully embraced my adoptive family or my role in it. Though they are warm, wonderful people, I was never able to fully accept their love for me,” she says.

Like the estimated three- to five-thousand Korean adoptees who return to Korea each year, Ms. Liem returned in search of her own family, and of the real Cha Jung Hee. She found her family—mother, brothers, cousins—and many women named Cha Jun Hee. The trip was traumatic, and eye opening.

“Adopted Asian girls of my generation were led to believe that if we had stayed in Korea we would have died of starvation, or become prostitutes. The women I met during my trip to Korea had led challenging, difficult lives, but they had led meaningful lives. They survived. They raised their children and sent them to college.

“We’re told, as adoptees, that we were saved from a dire fate. I realized my fate would have been different—I wouldn’t be a filmmaker—but it would not have been dire.”

For more than twenty years, Ms. Liem has developed, produced and distributed independent films. She produced, directed and wrote the Emmy Award-nominated personal documentary First Person Plural, which was shown at Sundance in 2000; the film won the grand prize for the best Bay Area documentary at the San Francisco International Film Festival.

Ms. Liem has produced several important PBS films over the last decade. She wrote, directed and produced the personal documentary In the Matter of Cha Jung Hee, a PBS broadcast on the award-winning series “Point of View” in September 2010. For her latest project, Geographies of Kinship: The Korean Adoption Story, Ms. Liem received funding from the National Endowment for the Humanities.

Former director of the Center for Asian American Media, she has developed films for public television and has also worked with Congress to support minority representation in public media.

Ms. Liem is a Sundance Institute Fellow and the recipient of a Rockefeller Film/Video Fellowship. Learn more about Ms. Liem and her work at www.mufilms.org.

The Hong Kong Distinguished Lecture Series, established in l998, brings speakers to campus to raise awareness about issues of concern in Asia and to help us better understand the cultures, art, and history of Asian countries. Former Milton trustee, Helen Lin, Class of 1981, with more than one hundred graduates living in Hong Kong, led the effort to establish the speaker series.