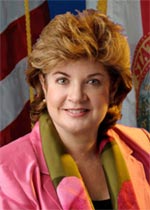 Surgeon General Viamonte Ros is committed to advancing healthcare delivery systems in public health settings and has volunteered with programs like the Camillus House Homeless Initiative in Miami, the Health through Walls International Health Outreach, and the Brookside Community Health Center in Jamaica Plain, Massachusetts. Throughout her community volunteer projects, she has been an advocate for disadvantaged individuals and minority communities. She has written several articles in the areas of mental health, radiology and family health, in addition to lecturing at numerous health care symposia. (www.doh.state.fl.us)

Surgeon General Viamonte Ros will speak to students during Wednesday’s assembly in the FCC and answer questions in Straus Library immediately following the assembly.