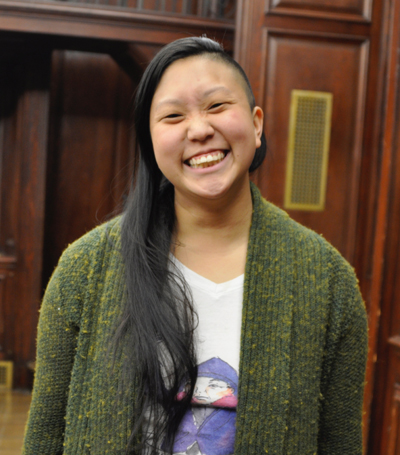 Focusing on two central goals—creating a better place to work, and a better way to source food—Irene Li ’08 shared with students her mission for responsibly operating her popular Boston restaurant.

Irene owns the Mei Mei Street Kitchen and Restaurant, along with her brother and sister. As the primary owner and chef, Irene balances environmentally sound kitchen practices, the use of fresh, local ingredients, and ethical labor practices.

Invited to Milton by the Sustainability Board and the Asian Society, Irene described Mei Mei’s food as “creative Chinese-American food, multicultural Asian cuisine, and also just food my family likes to eat.”

Irene never planned to work in the restaurant industry. “I didn’t go to culinary school, and I’ve never really taken a cooking class,” she said. “I am part of the YouTube binge-watching generation of cooks.” As a student at Cornell, her interests in social activism deepened, but she also fell in love with the backdrop of Ithaca, New York’s farmland. There, she began visiting a farmer’s market and learning the challenges and benefits of producing farm-raised food.

“I’m not a church-going person, but I imagine that people who go to church feel the way I felt about going to the farmer’s market every weekend,” she said.

Sourcing ingredients locally does not just provide for a more healthful, nutrient-rich meal, it’s a way to reinvest money in a community and support family farms. Mei Mei’s meat comes from animals who have lived outside for some of their lives—a standard not met in large-scale factory farms. In addition, the restaurant is committed to composting, recycling and reducing food waste.

Independent restaurant work is difficult—economically, socially and even physically—for everyone from dishwashers to managers and owners, but changing the culture is possible, Irene said.

Racism and sexual harassment run rampant in the restaurant industry, which makes up the largest percentage of minimum-wage earners—nearly 3.8 million people—in the country. The often toxic work environment in restaurants is compounded by a lack of opportunities for on-the-job training and advancement, Irene explained.

When Mei Mei opened, the Li family decided to place a strong focus on company culture. They applied for and received a state matching grant for workforce training, which gives each employee opportunities to learn every aspect of the restaurant business. They also have a transparent financial policy, which entitles employees to access Mei Mei’s profit and loss statements. The restaurant is a profit-sharing business; the resulting atmosphere is one of respect and cooperation.

“Our employees can see whether our business is successful or needs to improve,” Irene said, explaining that everyone has a stake in business planning. “Every time we meet our goal, we share the profit with our employees.”

Irene has collected a number of accolades from Eater, Bon Appetit, the James Beard Foundation, Boston Magazine and the Improper Bostonian. In 2017, Zagat named her one of its “30 Under 30.” Mei Mei began as a food truck in 2012, then as a restaurant in 2013, and also operates a successful catering business and launched its own line of sauces for retail sale.