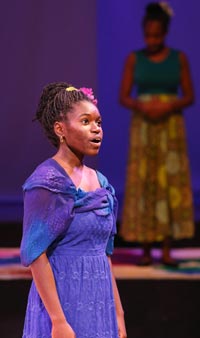 “This play was on my bucket list,” says director Dar Anastas, performing arts faculty member. “I’ve wanted to direct For Colored Girls since I was in college. It offers such a unique style of theater, and I’m happy with how the students have made it their own.”

For Colored Girls Who Have Considered Suicide When the Rainbow Is Enuf is a choreopoem written in 1974 by Ntozake Shange. The play tells the story of seven women, dealing with various difficulties, through 20 poems choreographed to music. The subject matter includes heavy topics, such as abandonment, rape, domestic violence, and dealing with H.I.V. The characters’ stories, however, communicate universal themes and triumphs of empowerment, survival, sisterhood, and love.

“Some of the material is heavy, but there’s a lot of celebration and humor in this play,” says Dar. “The characters’ lives are tough, and they’re dealing with intense emotion, but they survive. They overcome it. The students convey that so powerfully. With this material, I don’t go in as the authority. I learn as much from the rehearsal process as the students do.”

Like any Milton play, this production is the result of collaboration and unique initiative. For instance, the lighting design-which is important in this visually vibrant production-is the senior project of Alex Hanyok (I). This show also marks the first time that a Milton production’s live music has been performed “off site.” A student band will perform the play’s musical soundtrack from the studio theater, in Kellner Performing Arts Center but down the hall from King Theatre. Musicians will watch actors perform from a television monitor in the studio, managing a three-second delay, to take their cues. This band, Chee Chee Coal and the Trambones, is a group of seven students who came together when Dar requested student volunteers interested in providing music for the show. No faculty member leads the band; Dar provided sheet music, listened to several rehearsals, and offered feedback, but, as she says, “The students own it. That’s the wonderful thing about this show. The students really own it.”

“This play has been performed in many different ways, and we have our own take on it, too,” says Dar. “I’ve reinterpreted some of the pieces to include men; we’ve split some of the poems to create dialogue. Some productions play it very heavy with this material, but these characters allow themselves to dream in the darkest of time, and I think that’s so uplifting.”